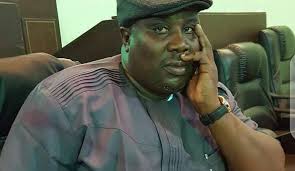 The former deputy speaker was impeached during plenary meeting held at the Assembly complex, in Okemosan, Abeokuta, after the committee saddled with investigating gross misconduct labeled against the Deputy Speaker submitted its report.

Meanwhile in a swift response, the former deputy speaker has described the purported impeachment as grossly unconstitutional and illegal.

“I just received the news of my purported impeachment based on the report of an ad-hoc committee set up by the Ogun State House of Assembly. The development, to say the least, was grossly unconstitutional and illegal.

“However, I have initiated consultation with my lawyers to fashion out the best possible way to address this infraction.

“I urge my teeming supporters, constituents and members of my political party in Ijebu North II State Constituency to remain calm as the issues that threw up this unwarranted action are sorted.

“In whatever capacity I find myself now or in the future, I remain committed to the ideals of a functional legislature, tenets of democracy and good governance”, he stated.