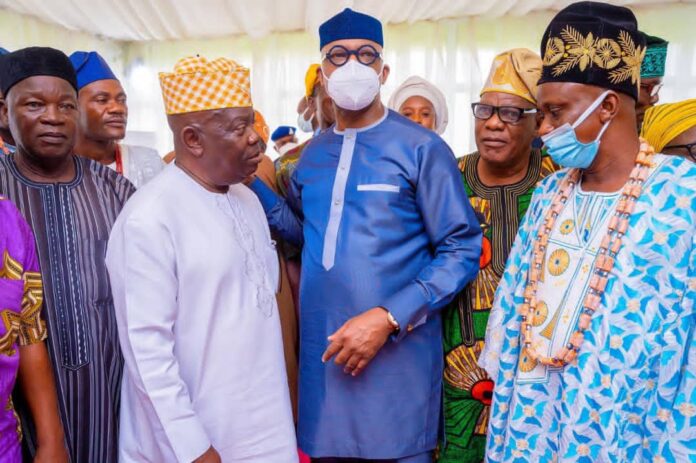 Ahead of the election primaries of the ruling All Progressives Congress (APC) Governor Dapo Abiodun of Ogun State has assures party members in the state APC under his leadership would be fair to all irrespective of misdemeanor of any party member in the past.

Abiodun gave this assurance when he received the immediate past Commissioner for Local Government and Chieftaincy Affairs, Jide Ojuko and his supporters who joined the mainstream of the party led by the governor, at the Presidential Lodge, Abeokuta.

The governor posited that since the returnees retraced their steps, they would be reintegrated into the party.

He said: “I know that you fought for a cause and if we are fighting for a purposeful leadership then we understand. But there is no need for the fight to continue since the election had been concluded and a governor emerged. I am not going to be the governor of APC alone, but the governor to those who did not vote for me.

“Your coming to join us was not by compulsion, it is out of your conviction. This action of yours is a vote of confidence of what we are doing. It is a vote of endorsement. This is a day of celebration for all of us in the APC. We may have our differences, but the important thing is for us to put those differences aside and work for the good of the party and the state.

“Let me assure you that as your leader and on behalf of the party, since you strayed and decided to come, you are welcome. I commend your sense of loyalty and determination to come back home. We welcome you with open arms. Please, integrate yourself and contribute to the success of the party”.

The governor, who used the occasion to reiterate efforts made by his administration to give Ota and its environs a face-lift, said two boundary roads were completed, while the most expensive road in the state, the Atan-Agbara, was on asphalting stage while plans have been put in place to extend the Lagos rail line from Okokomaiko to Agbara, to ease transportation in the area.

On the deplorable condition of the Lagos-Ota-Abeokuta road, the governor explained that the sum of N16b was needed to complete it, adding that work would soon commence on the road as the state has secured commitments from a private partner to fund the balance.

“We are collaborating with the Lagos State Government to extend the rail line going to Okokomaiko, we are extending it all the way to Agbara and Lusada. So, our people will have options – either they want to go by the road, which is a dual carriage expressway or they can go by train. The train will also be able to carry containers, goods and services and agro produce between Ogun State and the port of Lagos State.

“I want to plead with you that there are other roads that require attention, we may not able to do all the roads in a three year period, even in a four year period, but,I believe that we’ve established trust and confidence in you and we will ensure that all roads that are critical to the socio-economic development of Ogun West, particularly in Ado-Odo-Ota, will receive our priority attention”, Abiodun submitted.

The deputy governor, Engr. (Mrs.) Noimot Salako-Oyedele, while welcoming the returnees, said the administration would work harder as there was still a lot of ground to cover to meet the infrastructural deficit in the Ado-Odo/Ota axis and state.

She said as the Industrial hub of the state, the people of the area needed to work and ensure that they benefit from the infrastructural wind that is blowing across the state, assuring that “Aworiland would reciprocate the love and respect the governor has for the area at the appropriate time”.

The State Chairman of the party, Yemi Sanusi acknowledged the place of disagreement among members of the same family, noting however that the erstwhile members have taken the right steps by reuniting with the mainstream of the party in the State.

According to the Chairman, “this is the third time we are receiving our members who had strayed but retrace their steps. We are happy to receive you. I commend the governor for his inclusive policy and large heart. I admonish you to fully integrate with the party and feel at home.

“We are all one and owners of the party. The door of the party is open to all. Go to your ward, local government and state to integrate. We are ready to receive you because there is time to fight and time to make peace”.

Responding, Ojuko who came with representatives of various unions and associations in the area, said they decided to retrace their steps and align with the mainstream of the party haven gone astray for long.

“We are here to declare that we are Dapo Abiodun compliant. You have to forgive us. We did wrong in the past and we now see the light. In Ogun State APC today, you are the leader of the mainstream. When we embarked on the endless journey, we decided to turn back and come to the fold.

“We are now in APC proper, no more in illegal association. We will never go back to the road that is endless. As the party primary is concerned, you have won the ticket. If it is party politics, I would have brought only politicians, but because of election, I brought voters. With me are representatives of various bodies, unions and associations”, he noted.