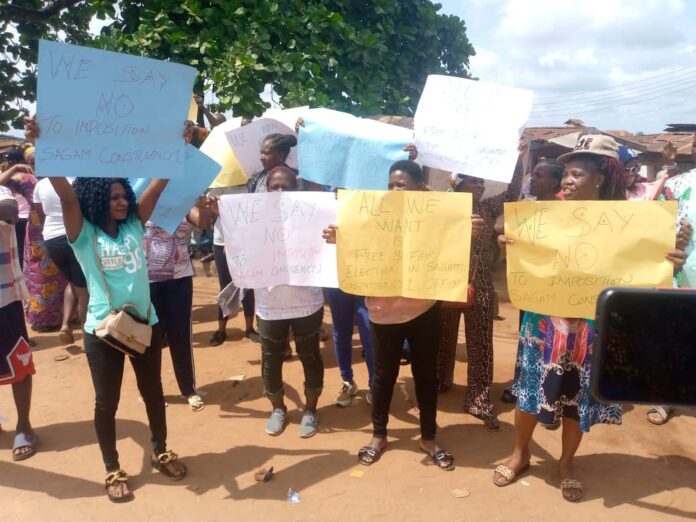 Members of the All Progressives Congress (APC) from Sagamu constituency 1, offin on Friday, protested against imposition of candidate over the party primary for members of the state House of Assembly held on Thursday.

The party members alleged of moves being made to impose Hon Abdul Bashir Oladujoye popularly called Shitta currently representing Sagamu constituency 1 at the state House of Assembly over another aspirant for the seat, Hon Abeeb Ajetunmobi saying that the party members would however not condone such lawlessness

The party members who held the protest around Eleja, Sagamu were armed with placards bearing different messages such as “All we are saying is that we don’t want imposition of candidate, “We are not asking for too much, we only demand for a free and fair elections”, “Hon Abeeb Ajetunmobi is ready to stand up for free and fair elections” among others.

Speaking with journalists during the protest, one of the delegates, Engr Tajudeen Sonubi said that “we are here to protest what happened on Thursday during the primary for the representative of the state assembly for Sagamu Constituency 1 which was held at Muslim High School, Sagamu.

“We found out that after the first five delegates from the Ward of our incumbent lawmaker, Hon Shitta had voted and delegates from other nine Wards wanted to vote for the candidate of their choice, rather than being allowed to choose the candidate that they want, the people there just started writing the name of Hon Shitta on the ballot paper but we rejected this outrightly.

“Some are even telling us that that is what the governor want, that he, the governor has instructed that Hon Shitta should be elected unopposed but we said this is a lie because even our governor, Prince Dapo Abiodun during the governorship primary held yesterday, Thursday allowed every other aspirants to contest after which he emerged winner at the end of the day.

“Even on this same day, the primary for the Sagamu constituency 2 was held, no intimidation from anyone, people were allowed to vote and at the end of it all a candidate emerged. We want same thing to be done here at Sagamu constituency 1, we are really not asking for too much because we are not ready to vote for inefficiency again, we want qualitative representation and nothing more”

Speaking in the same vein, Otunba Nosiru Soyebo, another member of the party said that the party members will only be pacified if they are allowed to vote for a candidate of their choice.

Otunba Soyebo said that “the truth remained that no primary election was held for the state assembly
in Sagamu constituency 1 on Thursday, we all kicked against imposition of Hon Shitta, our candidate is Hon Abeeb Ajetunmobi, he is the one we all want as our representative

“We are even surprised when we heard that he (Hon Shitta) has started parading himself all over the social media that he is the candidate for our constituency, that is a lie. The governor, Prince Dapo Abiodun should quickly intervene in this matter because we won’t accept this illegality and daylight robbery”

Other party stalwarts who spoke against the alleged imposition were Comr Balogun Olalekan, Alhaji Sanni Samsudeen as well as Mrs Idowu Bukola among others.