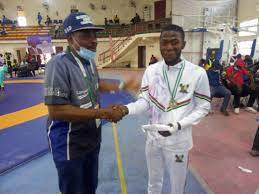 Arinola Abdullateef, who won a gold medal in Taekwondo at the ongoing 20th National Sports Festival (NSF), has dedicated the medal to the Lagos State Taekwondo team, coaches and officials.

Abdullateef’s appreciation is contained in a statement issued on Friday by the Director of Public Relations, Lagos State Sports Commission, Titi Oshodi-Eko.

Oshodi-Eko says the 27-year-old Abdullateef, is a graduate of Electrical and Electronics Engineering from Ladoke Akintola University, Ogbomosho, Oyo State.

“He beats Yobe athlete, Salisu Aliyu in the finals of their -54kg event on Thursday at the ongoing NSF in Benin.

“The gold medalist said he was excited for the feat achieved during the sports festival.

“I am very excited winning the gold medal. I’m happy and grateful to God for making this possible. Winning a gold medal at the NSF is a great achievement for me.

“The gold is for the whole Taekwondo team, the coaches and athletes. We have achieved this together by training together and the success is credited to all the team.

“Thank you Lagos State Government for giving us the opportunity to showcase our talents.

“I also want to thank the Lagos State Government for the opportunity given to us to be part of the contingent to Edo. The memory of winning a gold medal at this festival will be remembered for life,” he said.

Abdullateef who started Taekwondo in 2011, said he was looking forward to representing Nigeria at the world stage someday.

“I started Taekwondo in the year 2011. My love for all martial arts sports put my interest in the game of Taekwondo.

“I just enjoy doing it because of my keen interest in the martial arts.

“I hope that someday, my ambition to represent Nigeria in international events and bring glory to the country will be a reality,” he said.