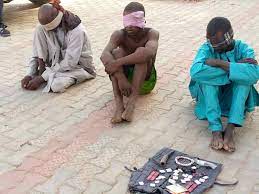 The NSCDC Public Relations Officer, Mr Ikor Oche, confirmed the development on Monday at a news conference, saying that the suspects were arrested at the state mass transit motor park in Gusau.

Oche said that the suspects were arrested early in the morning while trying to board a vehicle leaving for Taraba to joined other members who had already relocated.

He said, “Tukur Halilu, 27 years, is from Gabaru Village, Nahuche district, Bugudu Local Government Area of the state, and under a notorious bandits leader, Magajin Kaura.”

According to him, Halilu confirmed to be engaged in cattle rustling in all the villages around the local government.

“Although Abubakar Altine claims innocent, Hussaini confesses to belong to the camp of notorious bandits, Gugurawa,” he said.

The NSCDC spokesperson, however, said that Hussaini Altine had taken part in three different bandits attacks in Kurya, Bagawuri, Agamalafiya and Rijiya.

He added that the suspects were under intensive investigation that could spark further arrest of more suspects before prosecution.