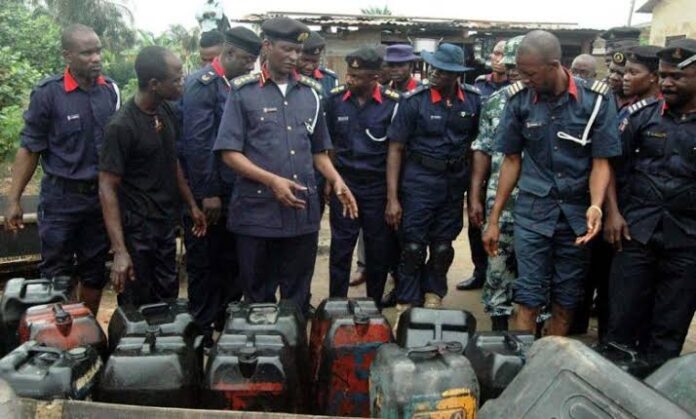 The Nigerian Security and Civil Defence Corps (NSCDC) in Edo on Tuesday arrested 27 suspects in connection with possession of 45,000 litres of suspected adulterated petroleum product.

Head of Anti Vandal Unit of the command, Mr. Benedict Apochi, made this known at the state command headquarters in Benin, while briefing journalists

Apochi said the suspects were arrested by the anti vandal unit at a yard they created for adulteration of petroleum product on the Benin, Aduwawa and Auchi road.

He also disclosed that the arrests followed security information from the intelligence department of the command.

He revealed that during the operations that brought about the arrest of the suspects, four trucks were found at the scene of the crime.

“However, two of the trucks totalling 45,000 litres capacity were fully loaded with adulterated petroleum product suspected to be diesel.

“Their modus operandi is to get genuine product with NNPC loaded truck, then offload and adulterate it and sell to the general public,”  he explained.

He said that search was still ongoing to see how others involved in the crime would be arrested.

Apochi advised those with the intention to engage in the crime to shelve it as their “waterloo” was by the corner.

He said the 27 suspects would be prosecuted and the command would seek for their convictions in the law court.