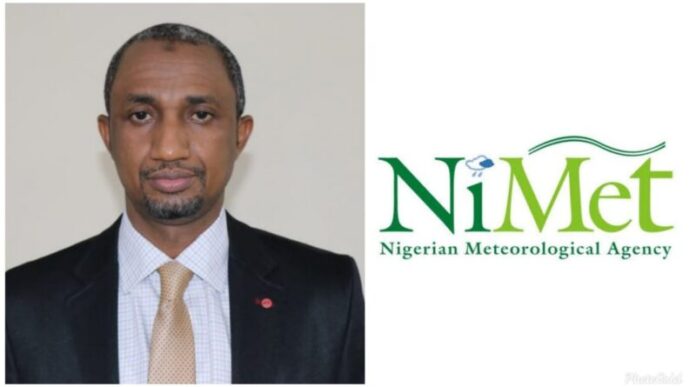 The Nigerian Meteorological Agency (NiMET) has said all hands are on deck   to implement the World Meteorological Organisation (WMO). The body, has also approved  climate early warning system by looking at the forecasting in the whole value chain daily and more from generation to dissemination, while getting feedback from the users.

This is just as the agency has signed Memorandum of Understanding (MoU) with about eleven universities including University of Agriculture, Umudike, Ahmadu Bello University (Abu) Zaria, Bayero University, Kano, University of Ibadan etc.

According to the Agency, the  MoU entails provision of weather stations, research collaborations and other areas of mutual benefits to both organisations.

Speaking about the innovative drive of NiMET,  General/CEO, NiMET, Prof Mansur Bako Matazu,  said NiMET is implementing what they call effective user communication, whereby they follow and channel their forecast to the various users and also get response from the users.

According to Matazu, this gives the agency confidence, that the forecast are performing wonderfully well, adding that, at times the users also give them advice on what they want at this rate, at this time and at this format and at this frequency.

The DG who insisted that the citizens who are vulnerable to increasing extreme events to climate change activities require effective climate early warning systems, said the approach is really helping the agency in terms of carrying the users along in decision making processes.

He said, “It is also one of the criteria that NiMET has emerged as one of the best place as a result of this among the African countries. We are leveraging especially on the goodwill of the country and the citizens and also the performance of the forecast.”

On the type of feedback NiMET gets from farmers especially, in terms of early warning, Matazu said “actually, we launched the NetApp popularly called Mobilemet. And we are collaborating with the International Fund for Agricultural Development (IFAD) and other development partners especially those that are working with rural farmers and in giving communities alert schedule on impending extreme events. So the response we are getting through this platform is one of the most important forecast disseminating platform and we started it as a pilot scheme and we are getting the support of the Federal government to expand it from this year so that we reach as many farmers as possible. In addition to physical workshops and seminars were conducted to the physical public weather forecast.

“We want to leverage on the use of technology especially handset to reach out to as many as possible. But we are getting testimonials from this farmers that the information contain in our forecast especially the cropping calendar, the alert system whereby it gives them the information that one day, two days and three days that we are going to expect heavy downpour and as such don’t this and that on your plot of land.

“This is really helping them because it reduces risks of extreme events and it also enhance on the other hand, their productivity and which is very good for the food security scenario of the country.”

Matazu also called on state governors to work with NiMET, as they stand a better chance of informing the citizens of the country and also to help reduce the effect of the extreme event by utilising and integrating the agency’s forecast into their annual planing activities.

Explaining further on the needs for states to work with the agency, he said, “So far so good, but not so many states are keying into this but Lagos state has been doing wonderfully well and also Katsina State and a host of other states that we are collaborating under the IFAD/FGN partnership.

“But there is a big room for improvement and I call on all state governments to please as a matter of urgency, that after the dissemination of the public presentation by our minister in January, they should please liaise with the agency so that we tailor the forecast at state levels that covers the local governments and wards and all the economic sectors,” he advised.

Emphasizing that NiMET is very much comfortable being domiciled in the Federal Ministry of Aviation, Prof Matazu stated that, they are getting all the support from the federal government, which is also helping to improve their services in other sectors.

Similarly, the NiMET boss said that they are equally getting the right support from the Federal Ministry of Agriculture, while they are already in partnership with the Nigerian Maritime Administration and Safety Agency, NIMASA and Nigeria Ports Authority (NPA).

Expressing the agency’s readiness to partner with organisations, Prof Matazu said that, “NiMET is ever ready and we are improving our services in the maritime industry. So we call on the sister agencies especially in the maritime industry to please collaborate with us in order to provide effective marine forecast services that NiMET has domesticated; we are also improving all our Installations and facilities. This has given us all the improved capacity and capability of our services.”

According to him, the school will help immensely in building and inculcating on the younger ones that are coming at the lower level of having the understanding of basics of meteorology and also  climate change.

“On the other hand, the school will also serve as a training centre that will be providing training on impact of climate on different sectors of the economy,” Matazu said.