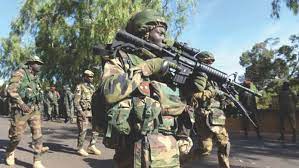 The Nigerian Army on Friday announced the relocation of its Directorate of Physical Training from Chindit Barracks, Zaria to Muhammadu Buhari Cantonment, Abuja.

The Chief of Army Staff (COAS), Lt.-Gen. Farouk Yahaya said this during the inauguration of the Headquarters Complex of the Directorate of Army Physical Training in Abuja.

He said the relocation of the Directorate from Zaria was first muted in 1993, but added that nothing was done until 2019 when a case was made for its movement to Rigachukun.

According to him, this was however, set aside because the location did not fit the picture of what the new Headquarters should be.

“It is therefore heartwarming that after 29 years, I am presiding over this ceremony to fulfill the dream of a befitting headquarters complex for the Directorate.

“The headquarters is co-located with the Army School of Physical Training and various facilities for the headquarters and school are currently undergoing construction.

He said the idea was to provide a conducive environment, which would spur the Directorate to come up with innovative ideas and initiatives for the fitness level of the Nigerian Army.

Yahaya said construction of the headquarters complex was part of plans for the development of the Cantonment intended to provide a decent alternative for the congestion of Nigerian Army formations and units within Abuja metropolis.

According to him, when completed, the Cantonment is expected to provide modern accommodation and facilities that will permanently resolve the recurring problem of inadequate accommodation in Abuja.

The COAS reiterated the commitment of his administration to continue to accord infrastructural development a priority.

“My plan is to gradually improve the equipment holding of the Nigerian Army whilst also, ensuring that personnel welfare, training and accommodation are given the desired attention.

“We have already made tremendous progress in this regard as there are various ongoing projects in formations across the country with a good number already completed.

“In the area of equipment holding, there is significant improvement as some of the platforms procured at the onset of my tenure have already been received while others are being expected.

“The improved equipment holding as well as general welfare of troops has led to a renewed onslaught on criminals, particularly in the North East and North West with significant successes being recorded,” he added.

In his remark, Maj.-Gen. Nasiru Muktar, the Director of Procurement, Nigerian Army said inauguration of the complex was historic as relocation of the directorate had become a reality after several years of planning.

He said the inauguration was a testament to the determination of the COAS to provide the needed infrastructure and improve the welfare of personnel of the Nigerian Army.

Muktar said the relocation and equipping of the Directorate along with the Army School of Physical Training was expected to provide an excellent opportunity for efficient service delivery.

He said it would also maximize the potentials of the directorate to promote physical fitness and mental alertness for personnel to professionally discharge their responsibilities.

According to him, the approval for the construction of facilities at Headquarters Directorate of Army Physical Training, Giri in phases was given in Aug. 20, 2021.

“The project was handled by Nigerian Army Engineers through direct labour and work began on Nov. 20, 2021 with the mobilisation of men, equipment and materials to the site.

“The project was executed to the highest standard by professionals who were permanently deployed to the site under the supervision of a senior engineer officer under the guidance and direction of the Commander, Corps of Engineers,” he said.