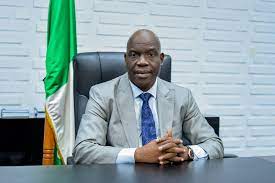 Komolafe said this at the Africa Economic Summit on Wednesday in Lagos.

Komolafe said the global energy transition is a reality, adding that it is affecting investments in fossil fuel industries.

“Nigeria is fully committed to the COP 26 agreement, having pledged to achieve net-zero targets by the year 2060.

“However, the implementation process would have to align with our strategic national interest toward energy security and sustainability.

“In keeping with this commitment, we will be adopting the ‘phase-down’ as against the ‘phase-out’ approach in exploitation and utilisation of our endowed energy resources.”

Mahmoud said the problem is being addressed through the gas-to-power initiative of the Federal Government with agreements being put in place to ensure stable supply of gas to electricity generation companies.

He said NERC is also giving support to renewables which is being piloted by the Rural Electrification Agency to provide off-grid electricity for Nigerians.

Reuben said in spite its huge potential and vast natural resources, Africa is still lagging behind in terms of human capital development.

He said there is the need for African countries to increase collaboration and forge strategic partnerships that would reposition the continent for greatness.