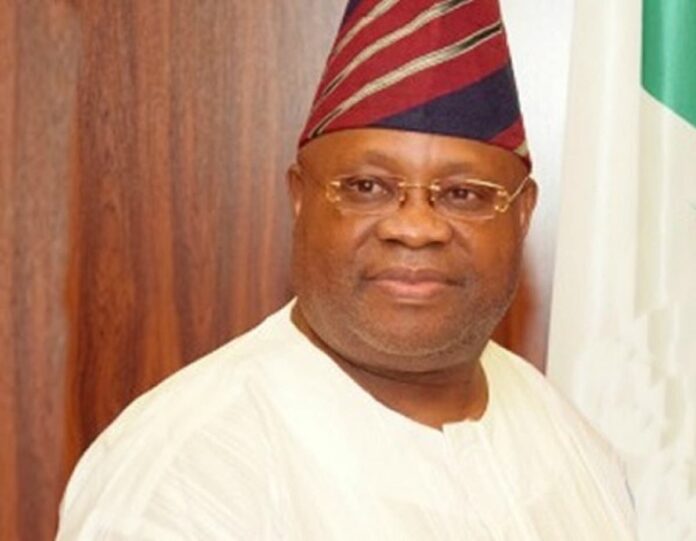 …Lawmakers fight back, drag legality of State’s slogan with Gov.

Executive orders by new Osun State Governor, Senator Ademola Adeleke, has taken the State on a boiling row as the Governor keeps on a toll of overhauling the State since Sunday upon his swearing-in as sixth Governor of the State.

The Governor on Monday sacked 12,000 workers and ordered the dethronement of three monarchs.

The immediate past Governor Adegboyega Oyetola had allegedly employed over 12,000 workers of various cadres into civil service in the state after the July 16, governorship elections.

Adeleke ordered the security operatives to take over the Palace.

In a statement by his Chief Press Secretary, Olawale Rasheed, the Governor signed the Executive orders which covered chieftaincy matters, appointments issues, setting up of review panel, staff audit and employment matters.

“All employments in the service of Osun State Government made in any capacity into any capacity in all the Ministries, Departments, Agencies, Commissions, Boards and Parastatals after July 17th, 2022 be and are hereby nullified.

“In the case of Ikirun, Iree and Igbajo, to avoid further breakdown of law and order, the appointments of Akinrun of Ikinrun, Aree of Ire and Owa of Igbajo are hereby put on hold pending review.

“Subsequently, the palaces of Akinrun of Ikirun, Aree of Iree and Owa of Igbajo should remain unoccupied, while security agencies are hereby ordered to take charge,” the statement read.

In another toll, Adeleke announced the suspension of the Chairman of the Osun State Independent Electoral Commission (OSIEC), Segun Oladitan.

The OSIEC Chairman was suspended alongside six members of the Commission.

This was contained in a statement signed by the Secretary to State Government, (SSG) Hon. Tesleem Igbalaye, on Monday.

The statement read, “The Executive Governor of Osun State, Senator Ademola Jackson Nurudeen Adeleke has directed the immediate suspension of the Chairman of the Osun State Independent Electoral Commission (OSIEC), Mr. Segun Oladitan and the following members of the Commission;

According to the statement, “This suspension is sequel to several petitions bothering on financial impropriety, dereliction of duty, absenteeism and abuse of office against the said Chairman and members of the Commission.

Meanwhile, the Osun State Independent Electoral Commission (OSIEC) has withdrawn the certificates of return from the elected Chairmen and Councillors.

This was contained in a statement signed by the Executive Secretary of OSIEC, Adedapo Adejumo, on Monday.

The statement read, “Consequent upon the judgement of the Federal High Court sitting in Osogbo in the case FHC\OS\CS\94\2022 involving the Peoples Democratic Party VS the Independent National Electoral Commission and six others, delivered on Friday 25th November, 2022 which nullified the Local Government Elections conducted by the Osun State Independent Electoral Commission (OSIEC) on the 15th October, 2022, the Commission hereby announces its decision not to appeal the judgement of the Federal High Court, Osogbo.

“The decision of the Commission is coming against the backdrop of OSIEC’s failure to follow strictly the provisions of section 24 of OSIEC Law, 2022 and Section 28 of the Electoral Act 2022, which mandate the Commission to give a notice of 360 days before the conduct of the election.

“In view of this, the Osun State Independent Electoral Commission (OSIEC) aligns perfectly with the decision of the Federal High Court, Osogbo as the elections stand nullified.

“Consequently, the Certificate of Returns already issued to the purportedly elected Chairmen and Councillors are hereby withdrawn with immediate effect.”

Following, the Executive Order by Governor Ademola Adeleke to reverse the slogan of Osun ‘State of Virtue’ to ‘State of Living Spring,’ Osun State House of Assembly, on Monday, fought back, arguing that the appellation of Osun as the State of the Virtuous remains legal.

Osun House Assembly argued that the State will continue to be described as State of the Virtuous.

In a statement by the Chairman, House Committee on Media and Publicity, Hon. Kunle Akande, the Assembly argued Osun will continue to be referred to as the State of the Virtuous (Ipinle Omoluabi), saying the decision is an enactment of law and not by choice.

According to the Assembly, the appellation is backed by relevant provisions, enacted by the assembly, and assented to in 2012.

The Assembly maintained that the State shall and will continue to be described as the State of the Virtuous (Ipinle Omoluabi) despite the changes to State of the Living Spring by Adeleke.

Adeleke had also removed the State logo from the Governor’s podium and shunned the State anthem at his campaign office where he swore in the new appointees.

Subsequently, the state flag at the government office was removed and replaced with the PDP flag.

The State Assembly maintained that usage of the State Anthem, Crest and Flag is an enactment of the law and as such, its usage is a matter of law and not by choice.

The statement read, “The usage of the State Anthem, Crest and Flag is an enactment of law and as such, its usage is a matter of law and not choice.

“The enactment ‘State of Osun Anthem, Crest and Flag Law, 2012’ assented to on the 18th of December, 2012 contained in Schedule I, II, III, IV and V, which carefully details every component of this law is not in ambiguity.

“Lastly, while we are aware of a court judgment in effect recognising ‘Osun State,’ the Assembly, pending the determination and exhaustion of all legal means would not be drawn into this matter.

“However, the State shall and will continue to be described as the State of the Virtuous (Ipinle Omoluabi).”

Meanwhile, as the overhauling takes place, there has been protest from some quarters over leadership composition.

Members of the National Union of Road Transport Workers (NURTW) on Monday clashed over leadership of the union in Osun state.

A member of the union who spoke with Nigerian NewsDirect under the condition of anonymity, said the members want a change in the leadership of the union as there is a new government in Osun.

He said the current leadership of the union comprise of loyalists of the past government of Adegboyega Oyetola in most of the motor parks.

There had been reports of attacks between rival gangs within the transport union in the state.

In Ile-Ife, members of the union were seen in different motor parks with dangerous weapons with a view to chase away the faction of current executives in the motor parks. The fraca was said to have happened in other parts of the state.

Investigation showed that free movement was distrupted across the town while members have withdrew their service which led passengers to be stranded. Though, as at the time of filling this report normalcy has been gradually returned.

A pregnant staff member of the union, identified as Doyin and an official of NURTW in Osun State, was allegedly beaten by factional members of the union who went berserk while trying to take over some motorparks with cutlasses and other dangerous weapons.

In the process of the attack, it was reported by the state secretariat of the union located at the Sadiat Hotel area of the State capital, that Financial Secretary of the Union, Sunday Akinwale, was badly injured.

Meanwhile, in a statement signed by Olawale Rasheed, the spokesperson to the Governor Adeleke on Monday, the State governor directed all security agencies to maintain status quo across the motor parks.

“All union leaders and their supporters are hereby directed to remain calm and bring any grievances to the State Government for resolution.

“Security agencies are consequently directly to maintain law and order,” the statement read in part.