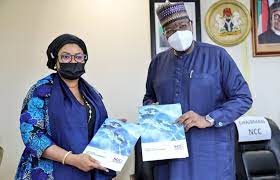 Under the agreement, NIGCOSAT is committing about 160Megs of C-band from which government will generate revenue from the sales to service providers through the NCC.

This is inline with FG’s efforts to unlock the full potentials of digital economy on the use of C-band spectrum for early deployment of 5G in Nigeria.

The Executive Vice Chairman, NCC, Prof Umar Danbatta made this known to NewsDirect in his remarks during the signing ceremony held in Abuja.

Danbatta disclosed that the MOU will facilitate the release of contiguous bandwidth for early deployment of 5G services in the largest market in sub-Saharan Africa.

EVC noted that C-band is required by operators for optimal 5G service performance and impact positively on Nigeria Economy.

“Amongst the Frequency Spectrum bands allocated to 5G by the International Telecommunications Union (ITU, the C-band (3.4GHz – 3.9GHz) stands out because its balancing point between coverage and capacity provides the perfect environment for 5G connectivity. The C-band is most suitable and appropriate for immediate deployment of 5G services taking into consideration availability of device ecosystem with 60-70% of global commercial 5G network deployment currently in the band, thus the importance of this Spectrum for early deployment of 5G services in Nigeria cannot be over emphasized.

“The Commission initiated negotiation with NIGCOMSAT whom in our estimate could make some adjustment to its satellite operation and release part of its Spectrum holding in the band to facilitate the deployment of 5G in Nigeria. The impeccable team at NigComSat proved us right. Ladies and gentleman, permit me to use this medium to appreciate the Management of the NigComSat under the distinguished leadership of my Sister Dr. Abimbola Alale for demonstrating that the interest of our dear country is paramount to our organizational or personal interest.

“The two agencies have been in discussions on how to relocate the operations of NG-1R to the standard C-band 300MHz (3.9GHz – 4.2GHz) potion of the band, which is more suitable in terms of Satellite service offering because end user terminal are cheaper there, while leaving the non-standard C-band 400MHz (3.5GHz – 3.9GHz) portion of the band for 5G use. The cost of relocating the NG-1R is expected to be offset from the proceeds of the auction of the 5G Spectrum.

“The two agencies have developed a Memorandum of Understanding (MOU) detailing all the aspect of this undertaking.

“It is my believe that the impact of this decision knows no bounds and will not only strengthen the relationship between both agencies but would also go a long way in making positive impact on the Nigerian economy”, he said.

Similarly, Chairman Board of Commissioners, (NCC), Prof. Adeolu Akande, reinterated the importance of the MOU.

“5G’s full socio-economic impact is dependent on access to a variety of spectrum resources. These Spectrum will play a key role in meeting the demand for many enhanced mobile data services as well as new wireless broadband use cases such as remote object manipulation, industrial automation, virtual and augmented reality and next-generation connectivity for vehicles”, he stated.