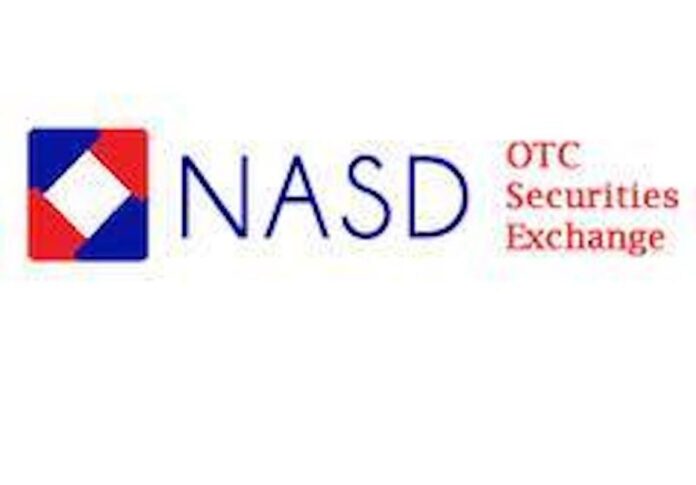 NASD OTC Securities Exchange market dropped by 0.91 per cent to close the week at 740.04  basis points against 741.45 basis points on last Friday.

Also, the market closed on a negative note Year-till-Date (YtD) as the market recorded a decrease in performance. NASD Security Index Year to date return fell by 0.22per cent.  Total volume traded Year-to-Date stands at 5,243,942 units in 38 deals and total Value traded is N97.58million.

There was a 441.54 per cent increase in the total value traded during the week as week saw NASD Investors trade a total of N82.37 million in value compared to N15.2 million in the previous week. Total trade activity for the year is valued at N97.58million.

The week closed with UBN Property Plc ranking top among the five most traded securities by volume and Central Securities Clearing System Plc as the fifth most traded stock by volume traded in the week.

The week closed with Niger Delta Exploration and Production Plc ranking top among the five most traded securities by value and Central Securities Clearing System Plc stood as the fifth most traded Security by value for the week.

One of NASD OTC Stocks closed the week with a significant increase in value.

FrieslandCampina WAMCO Nigeria Plc, which currently holds a market capitalization of N128.63 billion closes the week at N131.75 representing a 1.37 per cent increase from the previous close of N130.

Niger Delta Exploration and Production Plc, which currently holds a market capitalization of N60.77 billion closes the week at N335.00 representing a 1.52 per cent decrease from the previous close of N350.00.

Equities market down by 1.18%  over investors sell-off in Nestle Nigeria, others