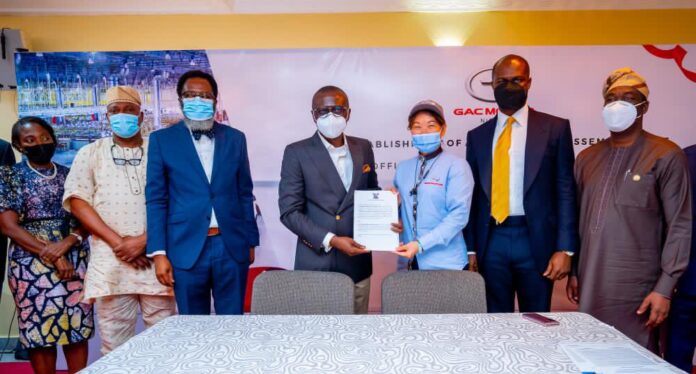 The Lagos State Government (LASG) has signed an agreement for the establishment of a new Motor Assembly Plant to commence full operation in a bid to boost the profile of transportation in the State.

This is just as the State Government on Thursday commissioned 1,000 Taxi units under a new Taxi Scheme tagged “Lagos Ride” to vitalise commuting experience on road transportation across Lagos metropolis.

The new development which has a projected incubation period of 12 and 18 months for the maturity of the Taxi Scheme and the Motor Assembly Plant respectively, was a Public Private Partnership (PPP) arrangement with an agreement between CIG Motors Co. Ltd and the Ibile Holdings Ltd, an agency of the State Government.

Under the Taxi scheme, the drivers who will be the operators will be given the the branded GS3, GAC Suv’s for a period of four years within which it is expected that on a monthly basis, they would have a check up dues to effect payment installmentally within the stipulated period.

Nigerian NewsDirect further gathered that the State Government is aiming towards a maturity level of scaling up the capacity of the Taxi scheme from the initial 1,000 to about 5,000 to 7,500 units within a short period of time.

It was also gathered that the State Government is set to unveil a subsequent scheme with larger coverage which will make provision for large capacity intervention for small and mass transit buses.

At the event of the commissioning of the 1000 units vehicle for the Lagos State Taxi Scheme, “Lagos State Ride” and the Signing of Agreement for the Establishment of the Motor Assembly Plant, Lagos State Governor, Mr. Babajide Sanwo-Olu, described the initiate as an innovative policy of his Administration in the bid to enhance the State’s vision of developing a multimodal transportation system and to strengthen the State’s economy.

According to him, the effort is channeled according to the Administration’s hope targeted at “making life a lot easier for Lagosians including mobility and creating a seamless multimodal transport system.”

“Remember again that in our THEMES Agenda, the first pillar is traffic management and transportation and we will continue to advocate and promise an integrated multimodal transportation system,” he said.

According to Governor Sanwo-Olu, the assembly plant on completion will be productive in boosting the State’s economy while creating new channels of employment opportunities.

“It is therefore even more heart warming to note that the Lagos State Taxi Scheme is being decorated along with the signing agreement of the establishment of a vehicle assembling plant in Lagos; a project that we believe will create jobs.

“We believe it will accelerate socio-economic growth and will further put our state on the global map as a centre of excellence and modern mega city that is committed to a sustainable development.

“As a people oriented government, we are constantly on our toes thinking of ways to make Lagos a lot more habitable and create opportunities for our residents and citizens and we are initiating and implementing ideas to make life more better for more Lagosians and to achieve our dream of a greater Lagos,” he said.

Stating that his government is committed to making Lagos metropolis a major hub of a mega city status, Governor Sanwo-Olu stressed that having a world class transportation system is significant according to the envisioning of the THEMES Agenda.

“We are working on the rails, waterways, and we will continue to work on road infrastructure. We are guided by the need for an equitable transportation system with choices for our citizens.

“So, this Taxi Scheme to be known as ‘Lagos Ride’ which is being commissioned today, is in fulfillment of our desire to give Lagosians a transportation choice.

“It is one of the Lagos State socio-economic intervention programme. The modern ride service will be professionally managed in line with the global best practice. The seed for this transaction, is that we are doing the first 1,000 taxis which we will be handing over once they all arrive to all of our well trained drivers.

“It is a social intervention programme that is tailored at ensuring that we can eradicate poverty, provide jobs opportunities for our citizens as well as provide basic necessities that they need to make life a lot more bearable.

“So, this scheme is a partnership with CIG motors who are also establishing a motor assembly plant here in Lagos for the production of different classes of vehicles.

“We believe that the establishment of the motor assembly plant is expected to revive industrialisation, increase citizens employment and create wealth for us. It will certainly boost tourism, encourage technology sharing and adaptation, and advancement among our citizens,” he said.

According to him, the objective of the Government is to ensure that such vehicle production and taxi system are such that are competitive with the best global standards.

“This is our very modest intervention to recreate the Lagos of our dream and bring it to fruition,” he added.

According to State’s Commissioner for Transportation, Dr. Frederick Oladeinde, the Taxi Scheme which is a form of social intervention programme operated by a private entity, will produce ancillary benefits which will significantly boost the profile of socio-economic and technological activities in Lagos metropolis.

In her remark, the Chairman, CIG Motors Co. Ltd, Chief Diana Chen, described the new development as a product of a business tour of China by Governor Sanwo-Olu in 2019.

Assuring full commitment to make the partnership agreement an enviable venture to the benefit of the State, she disclosed that the Group is going to sponsor about 50 students who are interested on engineering training for two years in one of the best vocational school in China.

“This is further to Mr. Governor’s trip to China in November 2019 which was a fruitful official business trip where numerous big projects and partnership cooperations were further strengthened and forged.

“Proudly i can say that today’s ceremony on GAC MOTORS ASSEMBLY PLANT and Lagos Taxi Scheme are amongst Mr. Governor’s China Trip output and delivery.

“It is important, to show the commitment towards the creation of the Sister State relationship between Lagos State and Guangdong Province.

“We, the Choice International Group (CIG), as the facilitator, we will repay you back with our full commitment and delivery on what we signed today. My teams are ready to work with 100% percent effort to build GAC MOTORS in Nigeria in the highest level of a brand.

“This international JV project, i believe will also soon bloom up in the Chinese business communities both in Nigeria and China. I can assure you, we will use it as a best example case to introduce and promote a “Greater Lagos and Greater Opportunities.

“Your excellency, your wise decision to partner with us to set up a world class Assembly plant, definitely is a right decision and a good investment, for both the government and the consumers in Nigeria. Because our mission is the same: let more Nigerians afford a brand new car with trusted quality and enjoyment of driving,” Chen said.