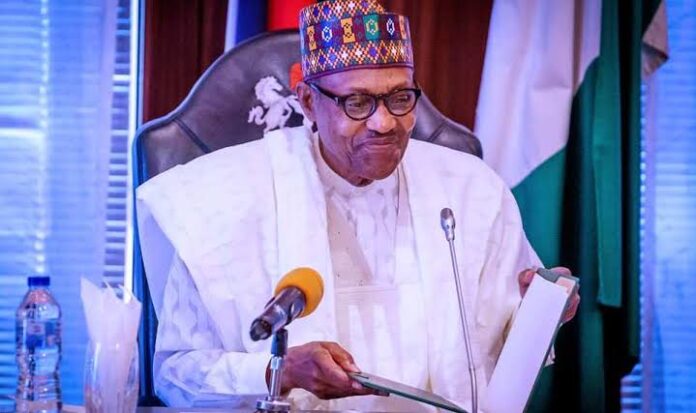 …Lawmakers must treat both bills with urgency — Ehindero

President Muhammadu Buhari has written the Senate for the consideration and passage of the Money Laundering Bill and Terrorism Prevention Bill.

Buhari, in a letter, warned that the non-passage of both bills poses a risk that may lead to the eventual blacklisting of Nigeria by the Financial Action Task Force (FATF).

He added that the request for the passage of the bills was in pursuant to the provisions of Section 58(2) of the 1999 Constitution as amended.

According to him, the deficiencies in the country’s Anti-Money Laundering/Combating the Financing of Terrorism regime (AML/CFT) makes it imperative for the passage of both bills.

Senate President Ahmad Lawan read the letter dated April 12, which was sent alongside the bills, at plenary on Thursday.

He said, “Pursuant to Section 58(2) of the 1999 Constitution of the Federal Republic of Nigeria (as amended), I forward herewith, the Money Laundering (Prohibition) Bill, 2022 and Terrorism (Prevention) Bill, 2022 for the kind consideration of the Senate.

“During the recent Mutual Evaluation carried out by the Inter-Governmental Action Group against Money Laundering in West Africa (GABA) there were observed deficiencies in Nigeria’s Anti-Money Laundering/Combating the Financing of Terrorism regime (AML/CFT).

“Following the evaluation, the Ministry of Justice and other relevant stakeholders reviewed said deficiencies and drafted the Money Laundering (Prohibition) Bill, 2022 and Terrorism (Prevention) Bill, 2022.”

The President explained that “Unless these deficiencies are addressed promptly by the National Assembly, to bring our legal regime in conformity with Financial Action Task Force (FATF) recommendations, Nigeria will face the risk of a negative public statement blacklisting the country by FATF.

“This will lead to some negative consequences to our rapidly growing economy,” he said.

“In light of the above, Federal Ministry of Justice reviewed the Money Laundering (Prohibition) Bill and Terrorism (Prevention) Bill  before the National Assembly and have come up with revised versions of the Bills, incorporating the resolutions to the deficiencies pointed out in the Mutual Evaluation Report, thereby bringing Nigeria’s AML/CFT legal regime in conformity with the FATF recommendations,” the President added.

Lawmakers must treat both bills with urgency — Ehindero

Speaking on the bills, the Lead Strategist of Nigerian Workforce Strategy and Enlightenment Centre (NIWOSEC), Dr. David Kayode Ehindero said, “These two bills were long awaited. I urge the Lawmakers to treat it as emergency bills because Nigeria is sitting under gunpowder.”

According to him, “The country is in this condition because of mismanagement of our resources by politicians who keep siphoning our funds and diverting into private pockets.

“The mismanagement of Economic resources at the detriment of the masses has resulted into the various menace of insecurity such as kidnapping, banditry and the insurgent activities,” he said.

Dr. Ehindero tasked the Government not to just pass the Money Laundering and Terrorism Prevention Bills but to also strengthen the security formation and anti-financial crime agencies in their fight against these vices.

He said, “Several bills have been passed by National Assembly and signed into law by the presidency but are lacking in value.

“The Government must take the ‘bull by the horns’ in ensuring the implementation Strategy of these bills.

“Nigerians are being killed on a daily basis, the recent railway attacked was an eye-opener so all hands must be on decked to flush out these miscreants.”