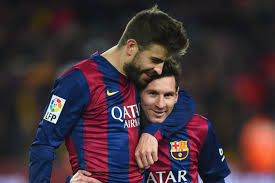 This claim was made by veteran journalist, Lluis Canu.

According to Canu, Messi is disappointed with Pique in the wake of the ‘contract’ saga, which saw him forced to leave Barcelona last summer, adding that the Argentine feels ‘deceived’ by the Spanish defender.

“The last contract renewal signed by Pique did a lot of damage to Messi and he felt disappointed,” Canu told Onze on TV3.

“In part, he also felt deceived by Pique, because [he then didn’t further reduce his contract] until Messi left the club and Messi felt he should have done that earlier to try and avoid his exit.”

Messi and Pique enjoyed a strong friendship while at the Nou Camp but parted ways last summer with the seven-time Ballon d’ Or winner moving to PSG on a free transfer.

That was because Barcelona was unable to renew Messi’s contract due to a lack of funds, Canu said.

Messi’s former teammates Jordi Alba and Sergio Busquets both took salary cuts in a bid to free up room for him to stay at Barcelona, although their efforts ultimately proved fruitless.

Pique, however, did not take a drastic slash to his wage package until after Messi had left the LaLiga giants, a situation the latter is said to still harbour frustration over.

The centre-back revealed last December that it was difficult to see Messi depart his boyhood side, and hailed him as the ‘best in history.

Meanwhile, Messi earlier this week returned to Barcelona where he celebrated the club’s manager, Xavi Hernandez’s 42nd birthday alongside Alba and Busquets at a Japanese restaurant.