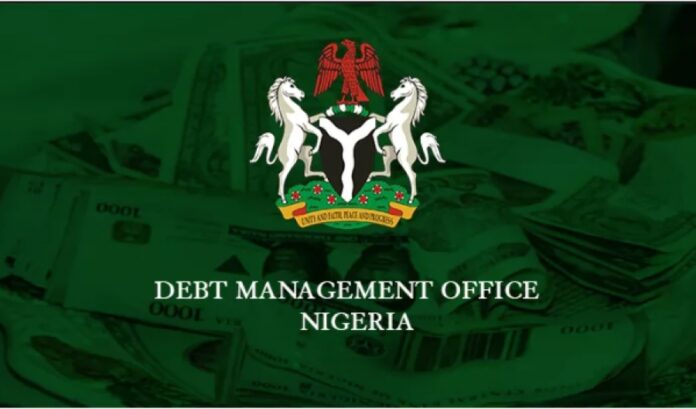 The Debt Management Office (DMO) on Wednesday disclosed that Nigeria’s total public debt stock that comprises of the Debt Stock of the Federal Government of Nigeria (FGN), 36 State Governments and the Federal Capital Territory (FCT) stood at N33.107 trillion or $87.239 billion as at March 31, 2021.

The report by DMO states that debt stock also includes Promissory Notes in the sum of N940.220 billion issued to settle the inherited arrears of the FGN to State Governments, Oil Marketing Companies, Exporters and Local Contractors.

“The FGN’s share of the Domestic Debt includes FGN Bonds, Sukuk and Green Bonds used to finance infrastructure and other capital projects as well as the N940.220 billion Promissory Notes.

Further findings by our correspondent revealed that actual domestic debt service in first quarter of 2021 stood at N612.7billion.

The breakdown revealed that FG spent N219.3billion to service domestic debt in January and it dropped to N123.09billion in March. However, the country’s actual domestic debt service closed March 2021 at N270.3billion.

The debt office in May clarified on President Muhammadu Buhari request to the national assembly for a resolution for N2.34trillion new capital raising.

DMO had said Buhari’s request for N2.343 trillion new borrowing was already captured in the 2021 budget.

DMO explained that proceeds of the loan were to be deployed to capital projects in various sectors of the economy.

“The proposed new capital raising, is the New External Borrowing already provided for in the 2021 Appropriation Act.

“It will be recalled that the President signed the 2021 Appropriation Bill which included new domestic and new external borrowing into law after the approval of National Assembly (NASS),” DMO explained.

It added that the presentation to NASS was in fulfilment of an enabling debt management legislature.

“Accordingly, the new capital raising has already been approved and is now being presented to NASS in order to fulfil the provisions of Sections 21 and 27 of the Debt Management Office (Establishment, Etc.) Act, 2003.

“The proceeds are to be deployed to capital projects in various sectors of the economy including power, transport, agriculture and rural development, education, health and water resources that are included in the 2021 Appropriation Act.”

A member of the Monetary Policy Committee (MPC) of Central Bank of Nigeria (CBN), Robert Asogwa in his personal statement on debt profile in Nigeria said, “A broader concern however, is the high level of public debt which was also a key issue raised in the January 2021 MPC meeting with debt service burdens now at or above the levels during the last global financial crisis

“While the debt build-up remains a key issue, the nature of this pandemic has warranted a debt surge in many emerging and developed economies, but with the speed of ongoing recovery efforts, debt decline will be imminent soon.”

According to Yusuf, Nigerians should be worried about the level of accumulated debt as it appears the nation lacks the capacity to service the debt.

He said, “We should be worried, particularly from the point of view of the capacity to service the debt.

“In 2020, for instance, debt servicing to revenue was close to 80%. In the current budget (the 2021 budget), the debt service provision was about N3.2 trillion. This is huge and clearly, the debt profile is clearly unsustainable.

“The debt to GDP argument is something that cannot stand in this type of economy because some major components of the GDP are not revenue-generating.

“So, we have a major issue with productivity of many sectors, and that is why what we should be worrying about is how to ensure that the debt situation is sustainable, and we can only do that if we relate a lot more with the capacity to service the debt.

“Currently, our capacity to service debt is very weak. And this is time for a very difficult choice to be made if we want to get out of this situation.”

He further emphasised the need to cut the cost of governance, which keeps increasing despite the drop in revenue generation.

“We need to deal with issues of cost of governance because, in all of this, revenue is dropping, it’s shrinking but the costs are still going up.

“The easiest thing to do when you have this kind of situation is to see how you can bring costs under control,” he added.