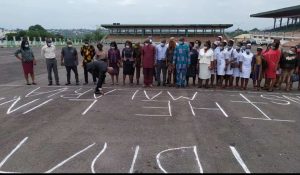 The Anambra Government says it distributed about 100,000 Long Lasting Insecticide-Treated Nets (LLIN) to school children  and pregnant women in 2020, as part of measures to prevent malaria.

Dr Vincent Okpala, Commissioner for Health made the disclosure in Awka on Tuesday at an event to mark the 2021 World Malaria Day.

Report state that the World Malaria Day is celebrated globally every April 25, to highlight the need for continued investment and sustained political commitment for malaria prevention and control.

The theme for this year’s commemoration is; “Zero Malaria – Draw the Line Against Malaria”.

Okpala lamented that the World Health Organisation (WHO) affirmed that malaria still killed a child every two minutes.

He said that the international body also warned that no child should die because they could not access life-saving services to prevent, detect and treat the disease.

“Malaria has become a major public health problem but the Anambra state government has not fold its hands doing nothing about it.

“In 2020, the government targeted the vulnerable by distributing 86,000 LLINs to school children and about 15,000 LLINs to pregnant women in primary and secondary healthcare facilities in the state.

“Insecticide treated nets have become a core intervention for malaria control and have contributed greatly to the dramatic decline in disease incidence and malaria-related deaths,” he said.

Okpala urged residents to key into the state’s health insurance scheme for easy access and affordability of Malaria diagnosis and treatment in any health facility.

“Our people should also compliment the efforts of the government by

using the LLINs, ensure clean environment to prevent mosquitoes from breeding and desist from self-medication.

“Go to the hospital for diagnosis, not every fever is caused by malaria or typhoid,” he advised.

Mr Nonso Ndudi, Programme Manager, Anambra Malaria Elimination Programme, said that due to sensitisation programmes and other measures put in place, the government was able to drastically reduce the burden of malaria in the state.

Ndudi listed some of the preventive strategies to include: distribution of nets, indoor residual spray and sensitisation.

He said that the government was working hard to change the psyche of the public to constantly sleep under the net to avoid making themselves vulnerable to mosquitoes.

He noted that the only sure way of reducing the burden of malaria for now was using the insecticide treated mosquito net.