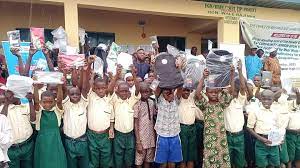 Receiving the School on behalf of the State Government, the Commissioner for Education, Mrs. Folashade Adefisayo thanked Raji for the laudable gesture, calling on other well-meaning individuals to invest in the education sector of the state towards ensuring a brighter future for the children.

She stated that such projects are in line with Governor Babajide Sanwo-Olu’s T.H.E.M.E.S agenda, adding, that more investments are still required in the education sector, as the State Government can not do it all on its own, without the support of public-spirited individuals and organisations.

While commending the facilitator, Adefisayo described him as an outstanding Politician, who is passionate, committed and determined to invest in education.

Adefisayo revealed that Raji has successfully delivered 13 educational projects to various schools in his Federal Constituency to bridge the infrastructural gap.

The Commissioner also commended the community for releasing the expansive land for the project free of charge.

The Tutor-General/Permanent Secretary of Education District III, Dr. Olufunke Oyetola said the Temu School project is an answer to the prayers and calls of residents of the Temu Community for the establishment of Public Secondary Schools in their community.

According to her, since the inception of the Sanwo-Olu led administration, laudable achievements have been recorded in the education sector which has led to the establishment, reconstruction and general rehabilitation of schools in the State.

In his remark,  Raji (MHR) noted that the event, which also marked the official commencement of academic activities in Temu Community High School, is historic especially being the first public Secondary School in the town, which is the fastest growing community in Epe Federal Constituency with a population close to 500,000 residents.

He added that in the past, Junior Secondary School students from the town travel daily to neighbouring towns for schooling, which exposes the young children to the avoidable risk of road accidents.

The member of the Federal House of Representative, however, emphasised the need for the Lagos State Government to put in place pedestrian bridges and traffic lights in different parts of Epe, particularly Temu, T-junction, Itaopo and other densely populated areas, just as he stressed the need for the dualisation of all major roads in Epe given the high vehicular traffic.

While congratulating the people of Temu, the MHR assured them of his continuous support, revealing that more classrooms will be built for the new school. He later distributed free school uniforms and exercise books to the students.