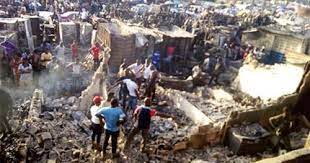 The Aguiyi Ironsi International Market Association, Ladipo, has commended the Lagos State Government for identifying with them over the fire disaster that engulfed some sections of the market.

Chief Emmanuel Mbamara, Chairman pf the association, in an interview with newsmen on Sunday in Lagos, called for the assistance of Governor Babajide Sanwo-Olu of Lagos State, as goods worth billions of naira were lost in the inferno.

According to him, the efforts of the Lagos State Emergency Management Agency(LASEMA) helped in preventing the fire from escalating to other buildings.

“I want to use this medium to thank Lagos State for their full support during this fire outbreak.

“And that of the Fire Service. Honestly, these people are great. They did a very nice job.

“I want to also thank the governor who has been of huge assistant and sending his men to come and commiserate with us,” Mbamara said.

He said that the Mushin Local Government Chairman had also been very supportive since the unfortunate incident.

” He is truly a father, a friend and a brother. He has been here.

“He even sent the vice-chairman to the market to see things for himself,” he said.

Mbamara said that the market lost billions of naira to the inferno.

He said that many of the traders lost everything they had laboured, adding that some lost two or three shops.

He said one of the traders lost an entire shop with car stereos that went for two million naira each.

“So, we lost a lot. The number of shops that we are looking at is about 200 or more shops that got burnt.

The chairman said that going forward, the market association would be working with LASEMA to establish an emergency response unit in the market.

The association would ensure that all shops were equipped with fire extinguishers and more access roads created in the market, in case of any emergencies.