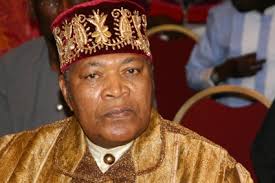 King Jaja gave his royal blessing when organisers of the marathon paid him a courtesy visit on Wednesday at the Rivers Traditional Rulers Council Secretariat in Port Harcourt.

He lauded the organizers, Kobiri-Opuboama (Connect Opobo), for coming up with the initiative and expressed the readiness of the people to support and participate in the marathon.

According to the traditional ruler, the Opobo marathon will foster unity and togetherness among the people.

“I can assure you of the full support of the Kingdom as well as the necessary modalities to be put in place,” he said.

King Jaja urged them to organise a world-class event in order to encourage and attract tourists to Opobo kingdom.

Earlier, Iyowuna Cookey, who led the organisers to the King, said the marathon, with the theme “Explore Opobo”, would boost local economy and encourages business networking.

Highlight of the visit was the inclusion of the marathon into the Opobo Festivals Calendar by the traditional ruler.