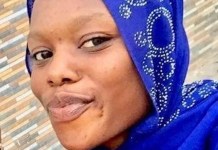 The kidnapped Adamawa female Journalist, Amra Isa-Mbamba, has regained her freedom, after the husband paid ransom to her abductors.

Ahmed Isa-Mbamba, husband of the victim, confirmed the development on Wednesday in Yola.

Amra was kidnapped on May 4, in her home at Mbamba Ward, in Yola South Local Government Area.

Isa-Mbamba, a former staff of Upper Benue River Basin Development Authority, said that ransom was paid before his was wife was released.

He did not disclose the amount.

“Amra regained her freedom on Tuesday, May 11, at about 10 p.m. and reunited with her family.

“She returned safely and an undisclosed amount was paid before her release,’’ the victim’s husband said.

He thanked security operatives, relatives and colleagues for their efforts in setting his wife free.

Amra was forcefully taken away leaving behind very young children, including a six-month old baby.

Speaking to newsmen, the young mother said she was grateful to God and happy to reunite with her family and friends.

DSP Sulaiman Nguroje, the Police Public Relation Officer (PPRO), in the state, said the police were trailing her kidnappers.

Our dream is to achieve market leadership in Nigeria — MD, International Breweries