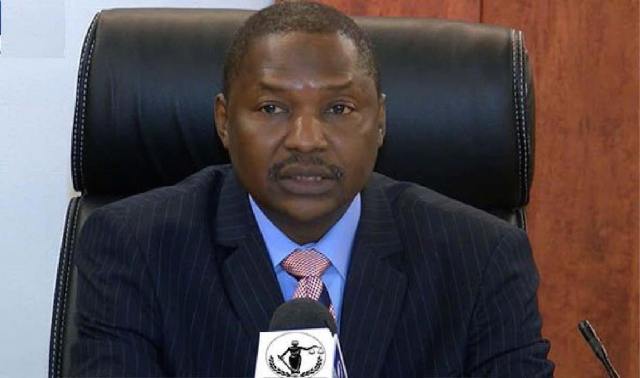 The Attorney-General of the Federation and Minister of Justice, Abubakar Malami has responded to the uncouth comments over Kanu’s arrest made by Alberta Justice Minister, Kelechi Madu, labeling him as an ‘Empty Vessel.’

It was reported that Madu had earlier attacked Malami calling him a ‘disgrace to the rule of law,’ a statement that didn’t go down well with the AGF.

Madu stated, “He has shown himself to be a bigot who does not understand what it means to live in a pluralistic society governed by the dictates of the rule of law.”

However, Malami called the Canadian justice official an ‘ignoramus,’ expressing disappointment that he faulted the manner in which the fugitive Kanu was arrested.

In his statement, Malami said, “There was no illegality in the entire process and the question of illegality does not even arise. It is a common principle of the law that he who comes to equity must come with clean hands.

“Where was the so-called Madu when Nnamdi Kanu was inciting violence against the country? Why, as a lawyer, would Madu support a fugitive who jumped bail and accused of terrorism and treasonable felony? What stopped Madu from voicing out dissent on the atrocities of Kanu and their group?

“It is important to educate the likes of Kelechi Madu that both Nigeria (his country of birth) and Canada (where he claims to be practicing law) are signatories to the Multinational Treaty Agreement where, among others, fugitive fleeing justice in nations with similar agreement could be brought back to face justice.

“It is a pity that as a Solicitor General of a province, Madu failed to keep himself acquainted with the provisions of general laws of the country where he stays as well as international laws.

He further chided Madu, calling him an “Empty vessel” that “makes the loudest noise.”

“We advise the so-called “learned man” to shelve his arrogance and learn to study the law books before opening his mouth to disgrace himself before the right thinking members of the society.”

The AGF also pointed out to Kanu Madu some Canadian laws on the treatment of fugitives.

He said, “We wish to draw the attention of Madu to the provisions of Consolidated Act Criminal Code under the Canadian Law R.S., C 1985, c. C-46:1-2 on Treason and other Offences vis:

“46(1) Every one commits high treason who, in Canada: (a) Kills or attempts to kill Her Majesty or does her any bodily harm tending to death or destruction, maims or wounds her, or imprisons or restrains her,

“(b) Levels war against Canada or does any act thereto; or

“(C) Assist an enemy at war with Canada or any armed forces against whom Canadian Forces are engaged in hostilities, whether or not a state of war exists between Canada and the country whose forces they are.

“46(2) Every one commits treason who, in Canada (a) Use force or violence for the purpose of overthrowing the government of Canada or a province;

“(b) Without lawful authority, communicates or makes available to an agent of a state other than Canada, military or scientific information or any sketch, plan, model, article, note or document of a military or scientific character that he knows or ought to know may be used by that state for a purpose prejudicial to the safety of defence of Canada;

“(c) Conspires with any person to commit high treason or do anything mentioned in paragraph;

“(d) Forms an intention to do anything that is high treason or that is mentioned in paragraph;