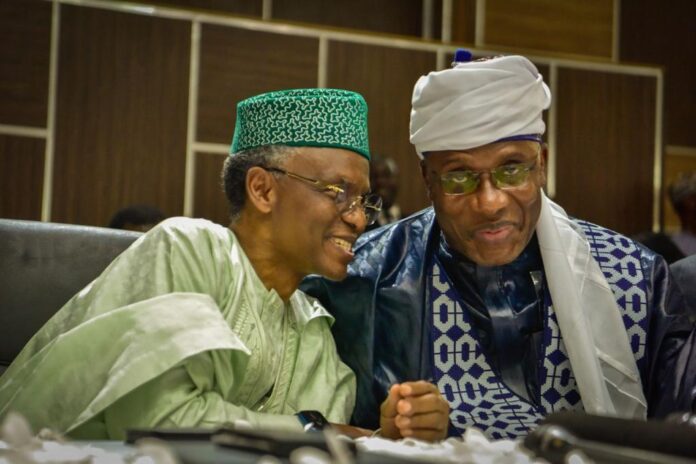 Delegates of the All Progressives Congress (APC) in Kaduna State on Sunday, pledged to give their votes to Presidential Aspirant and outgoing Minister of Transportation, Rt Hon. Chibuike Rotimi Amaechi.

The delegates made the decision two days after they had promised same to another visiting Presidential aspirant, stating that the earlier pledge by some of the delegates to that aspirant was a spur of the moment decision which no longer stands.

Addressing the delegates during the consultative visit by Amaechi to the State, Governor El Rufai said, “I told you when you made that pledge to Asiwaju that others may not come, because of what you have done. You made that choice without listening to anyone else. Today you have seen the difference. You’ve heard Amaechi, you’ve seen what he has done. And he has brought a very strong security team. So you know what will happen with our security if he is in charge.

“What are you going to do? Who are you supporting now? You have a huge burden on you, and you must choose what is best for Kaduna and for Nigeria,” El Rufai said.

He further narrated his experience of the goodness and sterling leadership qualities of Amaechi, from when he was Governor till date, and why President Muhammadu Buhari has high regard for him. He described Amaechi as a friend who sticks closer than a brother, stating that he is trustworthy.

“Let me tell you my history with Governor Amaechi… When we started discussing with the G-7, the seven governors that wanted to defect to the APC, I was holding nocturnal meetings with Governor Amaechi and Governor Nyako of Adamawa State until we got five of them to move to our party, and that was the game changer. And for you to understand how difficult it is, imagine Governor Amaechi of Rivers State from the same South South with incumbent President Jonathan. He made the sacrifice to move to our party. It was a game changer. This is part of the reason why President Buhari loves Minister Amaechi till tomorrow.

“One time the SSS wanted to arrest me, that I wrote something. Governor Amaechi called and said I will take you there and I will not leave until they let you go, what did you do? He took me there in his car and stayed there until they let me go. Till tomorrow, my wife will never forget that. Amaechi is her favourite Nigerian.

“I’m putting this in context so you’ll understand. APC is one family and this primary is an internal competition. We don’t need to call each other names, but let us bring out the virtues and good character of everyone. It is up to you as delegates to make the best choice for Nigeria,” the Governor stated.

Governor El-Rufai then asked the delegates who is their choice for President, to which the delegates unanimously chorused “Amaechi” and “Dan Amanar,” the traditional Daura title of Amaechi.

Speaking on behalf of the delegates, Speaker of the Kaduna State House of Assembly, Rt Hon. Yusuf Ibrahim Zailani, declared that Kaduna State delegates have reached the conclusion to give all their votes to the Dan Amanar Daura, Rt Hon Chibuike Amaechi.