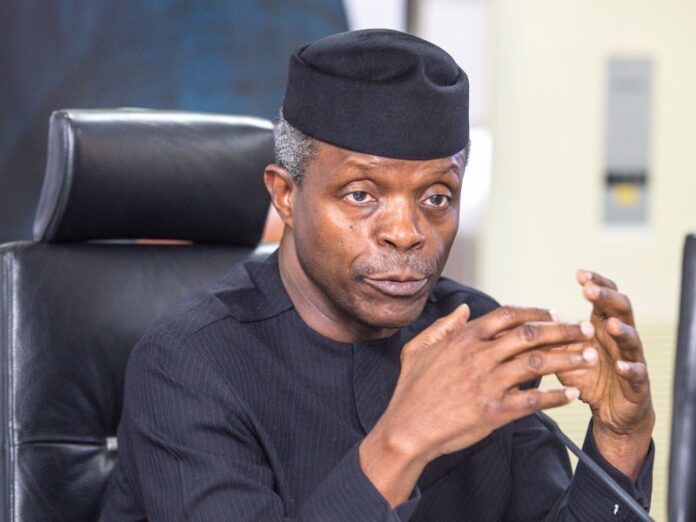 Vice President Yemi Osinbajo says it is worrying that a growing number of wealthy nations have banned or restricted public investment in fossil fuels, including natural gas.

Osinbajo spokesman, Laolu Akande, in a statement, said the theme of forum being held at the Dubai World Trade Centre, is “Energising Tomorrow.”

Osinbajo said that the world should not have to choose between energy poverty and climate change as the challenge could be addressed with both natural gas and Liquified Petroleum Gas (LPG) as transition fuels alongside other renewable sources.

“It is worrying that a growing number of wealthy nations have banned or restricted public investment in fossil fuels, including natural gas.

“Such policies often do not distinguish between different kinds of fossil fuels, nor do they consider the vital role some of these fuels play in powering the growth of developing economies, especially in sub-Saharan Africa.

“As development finance institutions try to balance climate concerns against the need to spur equitable development and increase energy security, the UK, the US, the EU have all taken aggressive steps to limit fossil fuel investments in developing and emerging economies.

“The African Development Bank, for instance, is increasingly unable to support large natural gas projects in the face of European shareholder pressure.”

The vice president acknowledged that all countries had a part to play in the fight against climate change.

According to him, a global transition away from carbon- based fuels must account for the economic differences between countries and allow for multiple pathways to net-zero emissions.

He said that it should not be necessary to have to choose between energy-poverty nexus and climate change since both could be properly addressed simultaneously.

Osinbajo said that were still close to 600 million Africans without access to electricity.

“For developing countries, unlike the rest of the world, the transition to net zero emissions poses two existential problems.

“Aside from the climate crisis, we have the problem of lifting millions out of extreme poverty and access to energy is a huge part of that.

“For the few with access to electricity, it is either unreliable due to lack of generating capacity and infrastructure, or unaffordable due to high prices.

“But a more important aspect of that problem is the 2.6 billion people globally without access to clean cooking solutions, including over 900 million in Africa.

“In fact, this energy-poverty nexus has distinct gender characteristics.

“ A report from the World Health Organisation revealed that about 4.3 million people die annually from inefficient cooking practices using polluting stoves paired with solid fuels like charcoal and kerosene…so, clearly there is an urgent need to transition from these fatally hazardous fuels to cleaner energy.’’

Osinbajo spoke on the implementation of Nigeria’s Domestic LPG expansion initiatives, including the LPG policy as part of its National Gas Policy and the National Gas Flare Commercialisation Programme.

He said there were specific provisions in the new Petroleum Industry Act (PIA) 2021 that elevated LPG as the fuel of choice compared to other competing fuels.

“And we have established a 20 million Cylinder Injection Scheme; 5 -10 million of these are to be introduced in pilot states next year.

“We have also established an LPG Energy Fund in the order of 50 million dollars in its first phase, in partnership with AFREXIMBANK.’’

He also listed the mandated conversion of 58,000 Telecommunications cell sites from diesel to LPG due to identified emissions from the industry and an autogas conversion scheme and capacity building in the 12 pilot states.

Osinbajo was accompanied to the event by Gov. Nasir El-Rufai of Kaduna, the Nigerian Ambassador to the UAE, Mohammed Rimi, among others.