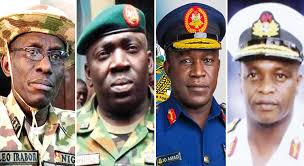 A security expert, Mr Dennis Amachree on Wednesday, urged the new service chiefs to utilise high technology armament in combating and bringing an end to insurgency in the country.

Amachree told newsmen in Lagos that such weaponry would aid the military in the fight.

Amachree said that the replacement of the former service chiefs was a welcome move as it met the demand of majority of Nigerians.

“We thank the former service chiefs for their service to the nation; and the new chiefs; I hope they are already aware that the expectation of Nigerians is very high.

“They should move quickly to bring this decade long insurgency to a halt and improve the morale of the fighting forces.

Meanwhile, Mr Ben Okezie, also a security consultant said that there was a lot of misconception about the sacked former service chiefs which the public needed to be enlightened about.

According to Okezie, it is the responsibility of the Nigeria Police to tackle internal security challenges and not the military that are saddled with dealing with external aggression.

Meanwhile, Dr Adetokunbo Pearse, a lecturer at the University of Lagos and public affairs analyst, said the replacement of service chiefs was not enough to tackle the nation’s security threats.

Pearse told newsmen that the nation must invest heavily in intelligence and also ensure decentralisation of security system.

The don who was reacting to the sacked of the former service chiefs, said that President Muhammadu Buhari must look for competence, commitment and experience in appointing security chiefs.

He also said that the citizens should be engaged.

“What is important now is not just the service chiefs that have to be replaced by other more current, vibrant and determined service chiefs but heavy investment in intelligence and decentralisation of security system.

“I hope the President focuses on competence, experience and commitment that is most important. It is not changing the service chiefs but change for better, progress and more success.

“There must be intelligence; we must know what is going on. There is no way this Boko Haram would have continued this long without support.

Akinremi called on the new chiefs to be up and doing and expressed optimism that the security situation in the country would improve with the appointment.

On his part, Olatunbosun congratulated them on their appointment, saying “they are coming at a time that we really need an overhaul in the nation’s security architecture.