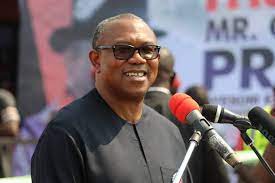 The Presidential Candidate of the Labour Party, Peter Obi, on Monday said he would grant power to the State Government to take responsibility for the security of their respective States.

“I have said it repeatedly that if I have the opportunity, every state will be responsible for her own security. I will make sure that the governors are given the powers to secure their states.

“Even if we have Federal police there, they will be responsible and  reporting to the governor. Additionally the state will be allowed to have  their own security system.

“We must  secure Nigeria, we will do every other things that is possible, which I’m not ready to disclose here. But it is one of those things as I go around learning what to do,Security is on top of my list. And I will assure you that what we’re going to do will be sensitive.”

The LP standard bearer also stated that he would tour all parts of Nigeria when he finally get elected as the President of Nigeria.

The former Anambra State governor said his solution to unify the nation will be embedded in his all inclusive administration.

“I will ensure that every part of Nigeria is included in the justice in the land, things are done fairly, we will consult, we will negotiate, we will make sure that nobody is left behind. Where we need to beg where we need to appeal we’ll do so.

“We’ll start by touring every part of Nigeria. I will ensure that all of them understand what we’re doing, understand those we have to carry everybody along. Every party  has to simultaneously consulted, dealt with, included in whatever we’re doing.”

While emphasising on the nation’s security situation that has been very worrisome, Mr Obi said he feels the Federal Government should do more.

Obi’s comments come a few hours after the terrorists who attacked an Abuja/Kaduna train on March 28, 2022, released three victims out of the 62 hostages who they abducted.

A disturbing video on Sunday had shown some of the victims being flogged, even as the terrorists threatened to sell some into slavery and kill others.

Reacting to the development and others across the country, the Labour Party’s standard bearer said, there were so many things that he would put in place to stem the tide of insecurity, most of which he cannot mention on air at the moment.

Mr Obi said in order for the security situation in Nigeria to change there needs to be economic transformation.

“To improve the security situation in Nigeria, as President, I will ensure the economy works and more people are pulled out of poverty,” he said.