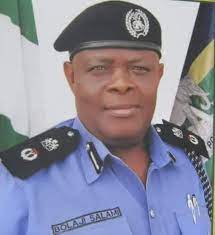 The Ondo State Commissioner of Police (CP), Mr Bolaji Salami, says he will not tolerate any act of criminality or sacrilege during the Eid-el-Fitr celebration.

Salami, in a goodwill message in Akure on Wednesday through DSP Tee-Leo Ikoro, Spokesman of the state’s Police Command, said any such acts would be dealt with in accordance with the laws of the land.

While congratulating Muslim Faithful across the state on the successful completion of the Ramadan Fast, which ushers in the 2021 Eid-el-Fitr, the CP urged them to use the period to pray for the peace and stability of Nigeria.

According to him, people should know that in spite of the insecurity being experienced and discussed in discordant tunes across the country, Nigerians would not be discouraged from celebrating.

Salami said: “If sizes were all that mattered, elephants and whales would be the intellectual equals of mankind, rather than the mental equals of dogs and pigs.

“The Nigeria Police and other security agencies in the country will overcome whatever insurgency or criminality affecting the country today; no matter how monumental the results of their attacks.

“Muslim faithful in Ondo State, and their friends across other religious divides, should learn to shun all acts inimical to the teachings of Islam.”

He therefore, wished all law-abiding citizens of the state the best of the period, even as they stayed within the ambit of the law.

The CP promised that the command would continue to work for the growth and stability of the state.