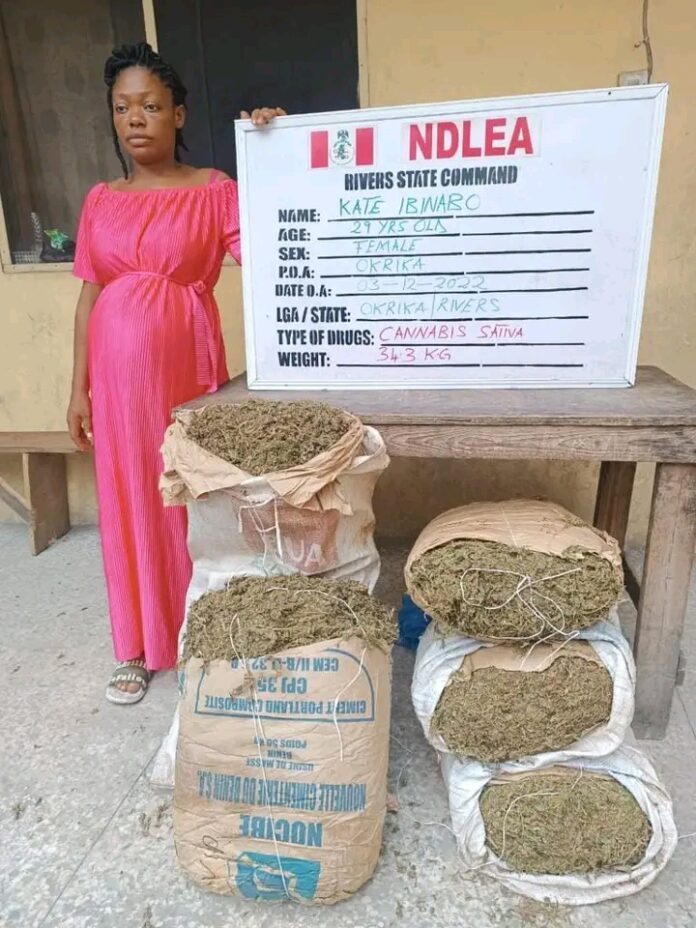 A 60-year-old grandmother and a pregnant woman were among those arrested during interdiction operations in which 5,527.15 kilograms of methamphetamine and cannabis sativa, as well as 132,090 tablets of tramadol and 2,000 bottles of codeine were recovered by operatives of the National Drug Law Enforcement Agency, NDLEA across five states and the Federal Capital Territory, Abuja in the past week.

This was made known in a release signed and made available to newsmen by Director, Media and Advocacy for NDLEA, Femi Babafemi, on Sunday I’m About

The statement reads; “The grandma, Mrs. Ibinosun Sandra Esther was arrested in Ibadan, Oyo state in a follow up operation following the seizure of 5.5kg Loud variant of cannabis imported into the country from South Africa. The consignment, which she claimed was sent to her by her daughter was concealed in two giant Speakers as part of a consolidated cargo that arrived the NAHCO import shed of the Murtala Muhammed International Airport, Ikeja Lagos on board an Airpeace Airline flight.

The statement reads; “The grandma, Mrs. Ibinosun Sandra Esther was arrested in Ibadan, Oyo state in a follow up operation following the seizure of 5.5kg Loud variant of cannabis imported into the country from South Africa. The consignment, which she claimed was sent to her by her daughter was concealed in two giant Speakers as part of a consolidated cargo that arrived the NAHCO import shed of the Murtala Muhammed International Airport, Ikeja Lagos on board an Airpeace Airline flight.

“In a related development, NDLEA operatives also on Saturday 26th November intercepted 1.4 kilograms of methamphetamine concealed inside custard tins packed among cosmetics and foodstuffs going to Brazil via Doha on a Qatar Airways flight. A cargo agent, Salako Omolara Fausat who brought the bag containing the illicit drug to the airport and an intending passenger to Brazil, Anyanwu Christian who was to travel with the consignment were promptly arrested.

“Another attempt by a freight agent, Adebisi Aina Hafsat to export 3,000 tablets of tramadol concealed in motor spare parts to Banjul, Gambia through the NAHCO export shed was equally thwarted by operatives who seized the consignment and arrested her on Monday 28th Nov, while a follow up operation to Ebute-Meta area of Lagos the following day, Tuesday 29th Nov led to the arrest of the actual owner, Afam Chibuke Stanley, who is a spare parts seller. This was followed by the seizure of 100,000 tablets of Royal brand of Tramadol 200mg with a gross weight of 68.90 kilograms imported from Karachi, Pakistan on Ethiopian Airlines at the SAHCO import shed.

“In Abuja, operatives stormed the warehouse of a notorious drug lord and an ex-convict, Ibrahim Momoh, alias Ibrahim Bendel who escaped from prison custody to return to his criminal trade and recovered 81 jumbo bags of cannabis weighing 1,278kgs. Though the fleeing drug dealer is still at large and is wanted by the Agency, his warehouse keeper, 55-year-old Ghanaian, Richard Forson Gordon was arrested.

“Ibrahim Momoh was first arrested on 27th November, 2014 with the same substance weighing 385.1kgs, prosecuted, convicted and sentenced to seven and a half years in prison on 22nd of April, 2020 but escaped from jail after three months. Meanwhile, no fewer than 2,000 bottles of codeine-based syrup were seized in a commercial bus by operatives on Friday 2nd December along Lokoja – Abuja expressway.

“In Rivers state, operatives on Saturday 3rd Dec arrested a 29-year-old pregnant woman, Kate Ibinabo with 34.4kgs cannabis sativa in Okrika area of the state. The Chairman/Chief Executive of NDLEA, Brig. Gen. Mohamed Buba Marwa (Retd), CON, OFR, has however directed that she be granted administrative bail pending when shes delivered of her baby and thereafter return for her prosecution because at the time of her arrest, shes in her ninth month of pregnancy. In Ondo state, 241 bags of the psychoactive substance with a gross weight of 3,133kg were recovered from a building at Ilale Cashew, Ehinogbe, Owo, on Tuesday 29th Nov. At least, 507.9kgs of cannabis were also seized during a raid at the hideout of a fleeing drug dealer in Mushin area of Lagos on Thursday 1st Dec.

While commending the officers and men of the MMIA, Rivers, Ondo, Lagos, Cross River and Yobe Commands of the Agency for the arrests and seizures, Gen. Marwa charged them and their counterparts across other formations to continue to step up their offensives against drug cartels.