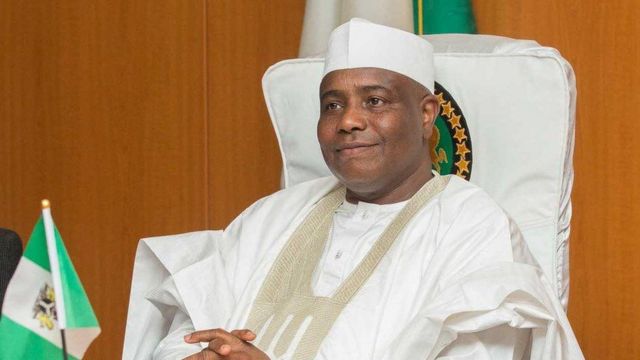 Reports said that the road was awarded to Messrs Retrercha Nig. Ltd., in Dec. 2018, at the cost of N1.8 billion.

Inaugurating the road, Tambuwal urged the benefiting communities to take ownership of it through proper and regular maintenance.

“I urged the benefiting communities to take ownership of this by properly maintaining it.

” You should also ensure regular clearance of all drains on the road in order to avoid flooding during rainy season” Tambuwal said.

He also commended Jigawa Gov. Muhammad Badaru for constructing the road and other people-oriented projects executed by his administration.

Earlier, Badaru said that the road, which was awarded in Dec. 2018 was completed and handed over in Dec. 2019.

“However, is could not be commissioned then due to COVID-19.

” This 744 Housing Estate-Sabuwar Takur-Yalwawa road is one of the numerous township roads constructed by our administration.

“And we will continue to initiate projects for the good people of Jigawa,” Badaru said.

Speaking on behalf of benefiting communities, Alhaji Zubairu Barwa, commended the governor for the gesture.

Barwa said that the provision of the road had eased the major difficulty residents faced, particular during rainy season.

He, however, pleaded with the governor for additional drains, street lights and completion of a mosque initiated by members of the community.

“This road has really brought a relief to the entire communities, because during the rainy season we, particularly motorists, find it very difficult to move in and out.

“We are also requesting for additional drains and street lights for security purpose.

“We also need the governor to assist in completion of our mosque which is at roofing level,” Barwa pleaded.

Also, the contractor, Mr Domis Eteres, commended the residents of the area for their cooperation throughout the construction period.