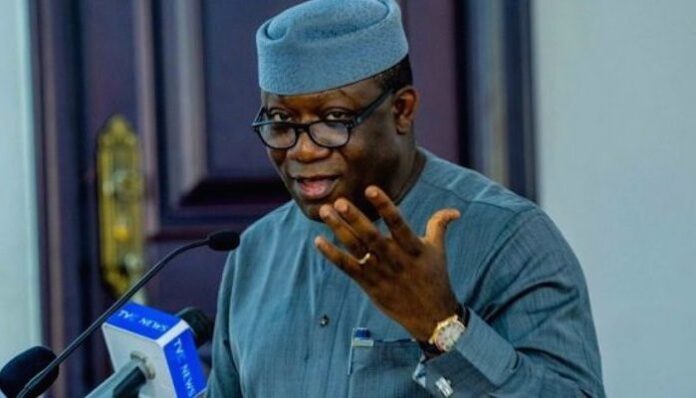 Gov. Kayode Fayemi of Ekiti State on Tuesday presented staff of office to two new traditional rulers, with an appeal to them to rally their subjects for the development of their communities.

Reports state that Fayemi, who was represented by his Deputy, Mr Bisi Egbeyemi, presented the symbols in Ado-Ekiti.

The traditional rulers are the Ologotun of Ogotun-Ekiti, Oba Adebayo Adesanmi and the Alaaye of Aaye-Ekiti, Oba Ojo Idowu.

The throne of the Ologotun became vacant on Jan. 29, following the demise of the late Oba Samuel Oyebade.

The throne of the Alaaye was vacant on Aug. 30, 2021, following the transition of the late Oba Theophilus Ogunbiyi.

Two separate ceremonies were held to give the two new royal fathers symbols of authority and official recognition as Obas.

Fayemi expressed satisfaction that the processes which produced them as traditional rulers were devoid of manipulation and unethical practices.

He also congratulated them on their emergence from the selection processes of their towns.

Fayemi paid glowing tributes to the immediate past Ologotun, the late Oba Oyebade and the departed Alaaye, the late Oba Ogunbiyi for their contributions, impact on their kingdoms and the development of the state.

He urged him to always remember that his achievements on the throne would depend largely on the quality of cooperation and goodwill from the people of his kingdom.

The Governor said Oba Adesanmi was equal to the task of leading his community to greater heights, noting that he had the pedigree and the experience to move Ogotun forward.

He urged the monarch to justify the confidence reposed in him.

He used the occasions to reiterate his administration’s respect for the traditional institution.

He said the state government was aware of the vital roles royal fathers played as agents of grassroots development in their different domains.

“The traditional institution had been identified as a veritable agent of governance.

”Their reconciliatory and advisory roles have fostered peaceful coexistence in the state, making our programmes for development achievable in a peaceful atmosphere.

“It is in realisation of this that our administration had been ensuring the prompt filling of vacant stools in accordance with the extant rules and regulations of appointment so that our royal fathers can continue to play the advisory and reconciliatory roles in their domains.

“Our various developmental programmes have tremendously and positively impacted our dear state for almost four years of this administration.

“All the achievements are with the support of all sons and daughters as well as residents of the state,” Fayemi said.

In his acceptance speech, the new Ologotun, Oba Adesanmi, said he accepted the staff of office ”with exceeding joy and gratitude.

He described his ascension as a new dawn in Ogotun-Ekiti.

Adesanmi pledged to always work in synergy with relevant stakeholders in ensuring the peace, stability, growth and development of Ogotun-Ekiti, in particular and Ekiti State in general.

“I am particularly determined to reach up on scale, continually as an example of contemporary and future-bound leadership, yet with a consciousness of history, tradition and the custom of our most natural humanity. The people are ready to take Ogotun to an enviable height.”

The Alaaye, Oba Idowu, hailed Fayemi for allowing a transparent selection process,  describing him as a man of integrity who made a great impact on the lives of the people of Ekiti State.

Describing Aaye-Ekiti as “one of the most peaceful communities in Ekiti State,” Oba Idowu pledged the loyalty and support of his subjects to the Fayemi government.

“We pray that our amiable Governor and his Deputy will see Aaye Ekiti as their home that needs support to move forward by providing the town with dependable infrastructure and social amenities,” Oba Idowu said.

The Executive Secretary of the Bureau of Chieftaincy Affairs, Mr Adegboyega Morakinyo, admonished the new traditional rulers to embrace tolerance, humility and sincerity of purpose, depicting royalty in discharging their duties.

He commended Fayemi led- administration for his keen interest in ensuring that all vacant chieftaincy tools were filled promptly and in strict compliance with extant laws, to ensure peace and harmony throughout the state.