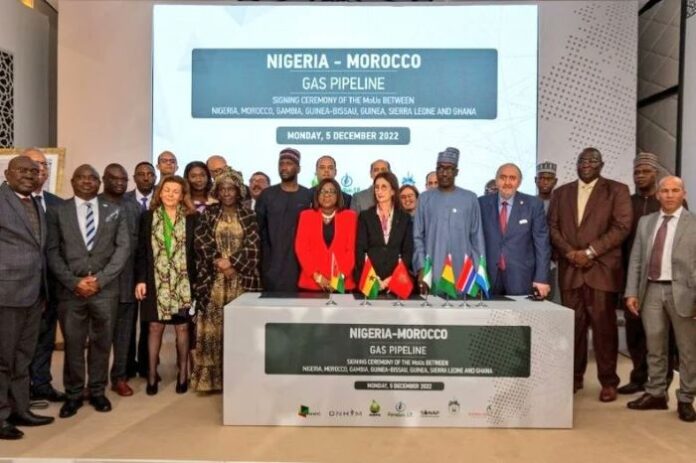 The Nigeria-Morocco Gas Pipeline Project (NMGP) has attained another milestone following the signing of a Memorandum of Understanding (MoU) on the project by Nigeria, Morocco and five West African Countries.

Speaking shortly after the signing of MoU on behalf of the NNPC Ltd., Kyari said it represented a significant step in fulfilling the Federal Government’s drive towards harnessing Nigeria’s abundant gas resources through NMGP.

According to Kyari, other benefits of the project include creation of wealth and improvement in the standard of living of the citizenry, increased cooperation between our countries while mitigating against desertification and other benefits to be derived from carbon emission reduction.

The GCEO who descried natural gas as a critical fuel in the transition towards net-zero, said that NNPC Ltd. was well positioned to progress the NMGP project by leveraging its experience and technical capabilities.

According to him, the capabilities range from gas production, processing, transmission and marketing as well as its vast experience in executing major gas infrastructure projects in Nigeria.

“The NNPC Ltd will facilitate the continuous supply of gas and provide other enablers such as the required land for the first compressor station to be deployed in Nigeria which is among the 13 stations earmarked along the pipeline route,” he said.

He lauded the strategic vision of President Muhammadu Buhari and His Royal Highness, King Mohammed VI of Morocco for entrusting NNPC Ltd and ONHYM with the project.

In their respective speeches, the representatives of the West African countries reiterated the commitment of their countries towards making the NMGP project a reality.

General Manager, Commercial/Legal Advisor of Ghana, Mrs Sylvia Archer who described the MoU signing as historic said the project was a monumental significance  to her organisation in its quest to bring nations and communities together through its operations.

In a remark, Managing Director, Gambia GNPC, Mr Baboucarr Nije said its search for hydrocarbons was encouraged by recent discoveries in neighbouring Senegal and Mauritania and the opportunity presented by NMGP would boost their chances to discover natural gas in Gambia.

According to the General Director, PDSL of Sierra Leone, Mr Foday Mansaray, he said his country is excited about the opportunities inherent in the NMGP partnership which has reinforced the virtues of greater collaboration that would further develop the continent.

Also speaking, General Director of PETROGUIN of Guinea Bissau, Mr Celedonio Viera, said his country was glad to be involved in the project because it would boost the livelihoods and economies of countries across the continent.

In her remarks, the Director-General of Morocco’s National Office for Hydrocarbons and Mines (ONHYM), Mrs Amina Benkhadra thanked the representatives of the five countries that signed the MoU.

It would be recalled that in September 2022, NNPC Ltd. and ONHYM signed MoU with ECOWAS Commission while in October 2022 it also executed an MoU with Petrosen of Senegal and SMH of Mauritania, all on the NMGP Project.