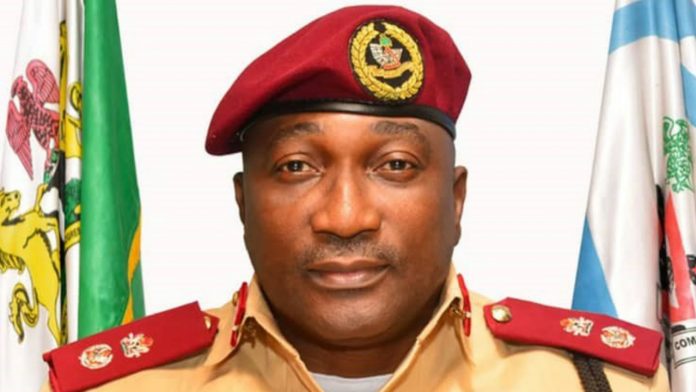 The Lagos State Sector Command of the Federal Road Safety Corps (FRSC) has drawn up agenda to reduce road traffic accidents by 15 per cent and fatality rate by 20 per cent.

The sector commander, Lagos state, command of FRSC,  Olusegun Ogungbemide who made this known in Lagos yesterday while fielding questions from Journalists also said that part of the agenda of the corps is capacity building of officers of the corps.

He attributed the fatality rate of accidents to over speeding, disobedience of traffic rules and regulations as well as road signs noting that some officers of the corps have in the past been deliberately killed by erring motorists in their bid to escape arrest.

Ogumgbemide noted that the country has enough traffic laws but the onus to obey the laws is on motorists and motor cyclists.

He also said that as part of efforts to reduce road traffic accidents the command held meetings with various stakeholders ranging from, road transport unions to the truck owners.

The sector commander pointed out that the perennial traffic gridlock at Apapa, can be attributed to the fact that during the period of economic boom many people invested in the procurement of trucks without thinking of investing in holding bays.

While commending the Lagos State government for the efforts made so far since the management of Apapa traffic was handed over to the state, he said that the port was originally designed for dry cargo.

He explained further that evacuation of freight from Apapa port became cumbersome when the country started importing crude and the number of tankers queuing to enter the port also doubled.

Ogungbemide commended the efforts of the present government for linking Apapa port with standard gauge railway line adding that the best to curb Apapa gridlock is the use of intermodal transport.

He stated that 94 per cent of freights in country are currently conveyed by road instead of railways.