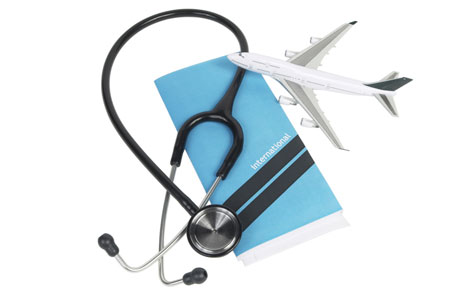 Medical trips abroad have been an elaborate part of the tours of Nigerian elites to foreign lands. The phenomenon is one subject which is known to be profound among the privileged unless for exceptional cases where the less-privileged have to be flown abroad on critical conditions. While the less-privileged would only afford such opportunity most likely on special intervention of help for critical conditions, the tour of the privileged for routine medical check-up is a signal depicting what the health sector in the Country is. Although the COVID-19 pandemic brought some alterations to the frequency of such trips, particularly during the lockdown which occasioned restrictions on international travels, the easing of the lockdown permitting international travels has however again begun to record the trend of medical tourism abroad on the part of Nigerians.

The recent travel of President Muhammadu Buhari to the United Kingdom to again seek medical attention has continued to generate outcries. The staging of a protest in London demanding the President back home to make use of Nigerian Medical facilities was borne out of the paradox that surrounds the state of the Country’s health sector. It is arguable that the fact the President cannot pose any confidence in the Nigerian health system for routine medical checkup means the Nigerian masses are exposed to hazards under the wobbling state of health architectures in the Country.

Against a position of the President which sometimes ago frowns at foreign medical  tours, it is quite unfortunate that the President has become a patron of such tours of seeking medical attention. The most recent trip has further generated reactions following its occasion at a time in which resident doctors in the Country instituted a strike over unpaid salaries, upward review of hazard allowances, and COVID-19 care incentives, which have left millions of poor Nigerians stranded without access to medical treatment. The paradox of the wobbling profile of the health system in Nigeria, despite the standard expected of the Country, has continued to raise concern among Nigerians domestically and abroad. It is quite considered an embarrassment that the custodians of the political architecture of State powers do not have confidence even in the system they have made available for Nigerians for health management.

The concern over the infantile and antiquatic state of the health system against the demands of present realities, has flashed the light for concerned stakeholders to begin questioning the expenditure of funds allocated for projects in the sector. However, while several soft spots of discrepancies have been identified, some alleged cases of perceived high profile mismanagement of funds, whose explanation have remained oblique, have led to suits instituted against the Federal Government in recent times.

Fore-front Civil Right Group, the Socio-Economic Rights and Accountability Project (SERAP) had recently in the wake of this reality,  filed a lawsuit against President Muhammadu Buhari over what was instituted as “his failure to probe allegations that N3,836,685,213.13 of public funds meant for the Federal Ministry of Health, teaching hospitals, medical centres, and National Food Drug Administration and Control (NAFDAC) are missing, mismanaged, diverted or stolen, as documented in the recently released 2018 audited report by the Office of the Auditor-General of the Federation. A statement signed by SERAP Deputy Director, Kolawole Oluwadare had stated that in the suit number FHC/ABJ/CS/433/2021 filed last week at the Federal High Court in Abuja, SERAP is seeking: “an order of mandamus directing and compelling President Buhari to investigate alleged missing N3.8bn health funds, and to promptly investigate the extent and patterns of widespread corruption in the Federal Ministry of Health, teaching hospitals, medical centres and NAFDAC.”

In the suit, SERAP had argued that: “Corruption in the health sector exacerbates inequality in already unequal and unfair political, social, and economic environments, and produces a ‘cash and carry’ health care system based on one’s ability to pay for care or one’s political position. Transparency and accountability in the management of health funds is essential for promoting access of people living in poverty to physical and mental healthcare, satisfactory health conditions, equality and non-discrimination, development, as well as good governance and the rule of law. The failure to investigate the alleged missing health funds, bring suspected perpetrators to justice, and to recover any missing public funds has exposed millions of poor Nigerians to serious health risks, amounting to violations of constitutional and international human rights and anti-corruption obligations. The fight against corruption in the health sector is vital for the effective enjoyment of the right to health by socially and economically vulnerable Nigerians, which in turn is essential to all aspects of a person’s life and well-being, and to the realisation of all the other fundamental human rights.”

The suit filed on behalf of SERAP by its lawyers, Kolawole Oluwadare and Opeyemi Owolabi, had the Minister of Justice and Attorney General of the Federation, Mr Abubakar Malami,  and the Minister of Health, Dr Osagie Ehanire,  as Respondents.

It had partly read: “Corruption in the health sector forces socially and economically vulnerable Nigerians to seek health services and treatment in unsafe and unregulated environments, leaving them susceptible to avoidable injuries and death. Poor Nigerians are not enjoying the right to health maximally because the Nigerian government is failing to address systemic corruption in the health sector, thereby rendering the authorities incapable of providing the basic amenities, infrastructure and resources that facilitate the full enjoyment of the right to health. A corrupt and dysfunctional health care system can hardly fulfil the physical and health needs of citizens. Such a system denies people access to the highest attainable standard of health care and simultaneously undermines their ability to pursue personal development and prosperity. The Nigerian government has the legal obligations to take the necessary measures to protect the health of the Nigerian people and to ensure that they receive medical attention when they are sick. This means taking prompt measures to investigate the alleged missing health funds, to ensure that health systems can deliver quality health care and services in an equal and non-discriminatory manner. The failure to promptly investigate the alleged missing health funds, bring suspected perpetrators to justice and to recover any missing public funds has continued to have serious implications for the ability of the government particularly the health ministry and agencies under its control to meet the health needs of socially and economically vulnerable Nigerians. By the combined reading of the Nigerian Constitution of 1999 [as amended], the Public Procurement Act, and the country’s obligations including under the International Covenant on Economic, Social and Cultural Rights, President Buhari and his government have legal duties to promptly probe allegations of corruption in the spending of health funds, and to ensure access of poor Nigerians to quality healthcare.”

It is no gainsaying that the health system in the Country is headed for the precipice rather than showing hope of development prospects. It is therefore observable that the sector is conceivably driving towards depreciation than appreciation. The clusters of several defecting phenomena troubling the sector are subjects of immense concern. The profile of health facilities within the public health architecture which houses the greater labour in the sector, are compounds of unsavoury tales which the practitioners have continued to express concern against. The poor attention displayed to such subjects as the prevailing archaic infrastructures, medical equipment, poor working conditions, allowances and the likes, have made the phenomenon of brain-drain to emphatically assume a troubling profile, as more medical doctors continue to flee the Country for greener pastures.

The loss of confidence in the sector,  even by custodians of the State power architecture to patronise same for their health treatment, is a show of jeopardy. The overburdened system of health in the Country has continued to manifest the symptoms of strains. It is paramount for the Government to turn a new posture of relevance to addressing the woes of the health sector. The prevailing posture of the custodians of State powers reflects an absence of political will; borne out of apparent insensitivity to the popular plight of the unprivileged masses who are left with no choice than grappling with the inefficiency of the comatose health system of the Country, while they resort to options of routine medical tours using State finances. The call to redirect efforts which give expression to the demands of the factual political will needed to drive the impetus to revolutionise the Country’s health sector is thus a pressing necessity.

Economy: Identifying soft-spots of comparative advantage in the diversification drive