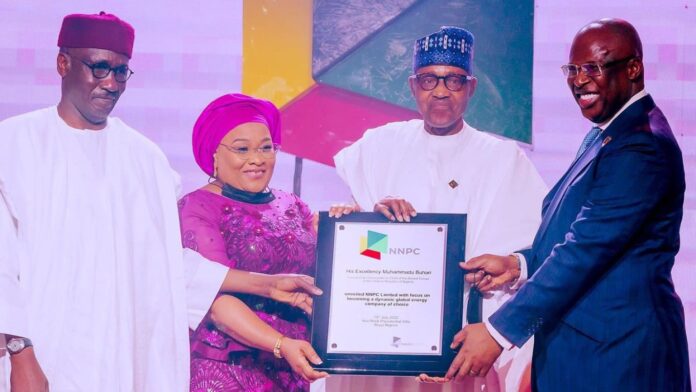 The new price is reported to have jumped from its initial N165 to N178.

Meanwhile, the unveiling of the new entity at the Presidential Villa, Abuja, stated that the oil firm will now be more accountable and transparent in line with international best practices.

He said, “The provisions of PIA (Petroleum Industry Act) 2021, have given the Nigerian petroleum industry a new impetus, with an improved fiscal framework, transparent governance, enhanced regulation, and the creation of a commercially-driven and independent national oil company that will operate without relying on government funding and free from institutional regulations such as the Treasury Single Account, Public Procurement, and Fiscal Responsibility Acts.

“It will, of course, conduct itself under the best international business practice in transparency, governance, and commercial viability.”

The President said the government was transforming the petroleum industry to strengthen its capacity and market relevance for current and future global energy priorities.

“By chance of history, I was privileged to lead the creation of the Nigerian National Petroleum Corporation on July 1, 1977. Forty-Four years later, I was again privileged to sign the Petroleum Industry Act in 2021, heralding the long-awaited reform of our petroleum sector,” he stated.

“I, therefore, thank Almighty God for choosing me to consistently play an important role in shaping the destiny of our national oil company from the good to the great.

“NNPC Limited will operate as a commercial, independent, and viable NOC at par with its peers around the world to sustainably deliver value to its over 200 million shareholders and the global energy community while adhering to its fundamental corporate values of integrity, excellence, and sustainability.”

He said NNPC Limited was mandated by law to ensure Nigeria’s national energy security is guaranteed to support sustainable growth across other sectors of the economy as it delivers energy to the world.

“It is, therefore, my singular honour and privilege on this historic day of July 19, 2022, to unveil the NNPC Limited, with a focus on becoming a dynamic global energy company of choice to deliver energy for today for tomorrow, for the day days after tomorrow,” Buhari stated.

On the claim of price increment of the PMS, a circular went viral in the media that the Nigerian National Petroleum (NNPC) Limited had directed the oil marketers to increase the pump price of petrol to N179 per litre, from N165 per litre.

This is coming as major filling stations in Lagos, Abuja and other cities have already adjusted their pump to reflect the increase according to findings by NewsDirect.

The marketers charged the NNPC Ltd to be competitive and efficient in its operations going forward in order to achieve the aim of the transition and for the benefit of the nation.

Mr Olumide Adeosun, Chairman, MOMAN and Mr Chinedu Okoronkwo, President, IPMAN, made this known in separate interviews with journalists on Tuesday in Lagos.

He said, “The direction that they have taken is certainly one that has proven to be workable for other national oil companies and definitely a step in the right direction.

“Nigeria will benefit as a country consequently because it means that efficiency will now be one of their drivers rather than politics.

“It means that they will have a preference and deference to a free market rather than monopoly.

“I wish them great success because they are now competitors in the downstream sector.”

Similarly, Okoronkwo described the move as a good omen because it would open up both the downstream and upstream sectors of the industry.

“The company is now going to be making profit which ultimately will be a game changer for our economic situation.

“I believe that they will be here to do business like any other oil company and compete because competition will always bring out the best of any situation,” Okoronkwo said.

He said the transition of the NNPC and the coming on stream of the Dangote Petroleum Refinery would play significant roles in shaping Nigeria’s energy future.

Okoronkwo reiterated that IPMAN would continue to support policies initiated by the government to improve the oil and gas sector of the economy.

Some oil Marketers who spoke exclusively to Nigerian NewsDirect questioned the circular, noting that the NNPC does not have the legal backing to issue such a directive.

Reacting to the plan increment, the Executive Secretary of Major Marketers Association of Nigeria (MOMAN), Mr. Clement Isong said “This does not make it true? By law NNPC has never set prices and cannot approve prices. NNPC is not a regulator.”

According to him NNPC does not set pump prices. Therefore, the news is obviously fake news.

Also Speaking, the immediate past President of Major Oil Marketers Association of Nigeria (MOMAN), Mr. Tunji Oyebanji has questioned the signatory of the release on fuel pump hike?

He said “Was it on any official letterhead paper? Is NNPC responsible for pricing or NMDPRA?