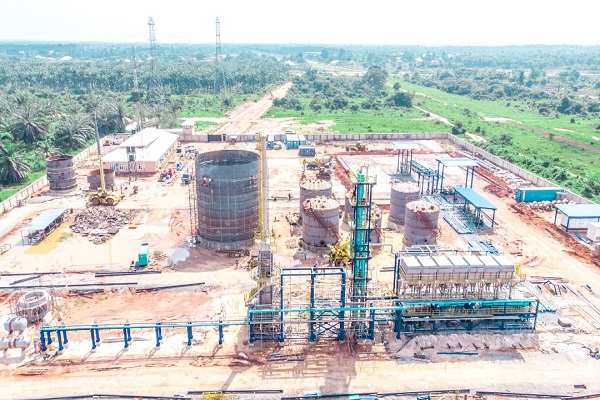 Speaking to journalists shortly after the facility tour of the refinery, Mr Simbi Wabote, Executive Secretary, Nigeria Content Development and Monitoring Board (NCDMB) said that the refinery was the second to be switched on in July.

“Currently, one of our refineries is working which is Watersmith modular refinery producing 5,000bpd and serving the Eastern market.

“We thank our partners, NNPC as well as Seplat for providing us with the desired crude. Here, we are working very hard with summit oil and other partners that want to partner us to supply crude.

“The plan is that on July 18, DPR will come and do the final check in terms of giving us approval to introduce hydrocarbons into the refinery.

“So, between now and the end of July, this refinery in addition to the one we have in Ibigwe will become operational.”

He also noted that the energy park was with a data centre that was currently operational.

He also noted that between the last time the project was inspected in March and now there was remarkable improvement in terms of installation of the Gas Processing Facility (GPF) and completion of the refinery installation.

Also speaking Mrs Mobolaji Kuku, Chairman, Duport Midstream board, said that the facility was a first of its kind.

“What we have here is a vision that is almost a reality. We have a refinery, a data centre among others. We have different components on one site and it has never been done before.

“We have maximised the potential of this place. Nigerians are going to see what is possible in this country. It is almost here.

“We have to start doing things ourselves. We have to become self-sufficient, and that is the underlying thinking behind the project,” she said.

Meanwhile Dr Akintoye Akindele, Managing Director/Chief Executive Officer (MD/CEO) of the company said that Duport was conceptualised to be a modern company not just in engineering but also as the company engages with the community.

Akindele said that the energy park had a positive carbon footprint, which according to him meant it was not destructive to the environment.

“The gas being flared is converted to power for homes. The data centre here has four power sources and more than two of them are power friendly.

“Almost everything you see here is local content and it is 90 per cent local content. A lot of work done has been outsourced to the community here.

“We have not only carried the community along, we have partnered it.

“We have not only looked at the environment, we have ensured that our footprint is positive. And most importantly, local content wise, we have made sure it is by Nigeria.”

The MD/CEO further disclosed that the company had four separate assets going on, adding that they included a refinery, gas processing facility, compressed natural gas facility as well as power plant and data center.

He further disclosed that within the next 12 months to 18 months there would be a modular LNG facility as well.

Akindele also disclosed that at the moment the refinery could process 60-million-scf (Standard Cubic Feet) of gas daily.

“The concept of modular is to ensure you are able to scale up as demand rises. Most of us investing here are not from Edo, but we are Nigerians.

“So, it is not about where you are from, it is about us being one that we fundamentally believe that we are better as one,” he also said.

“We have more than 300 direct jobs running shifts for phase one, and by the time we are done it will be thousands of people.

“We are starting our internship programme, where we will train 600 engineers yearly,” he added.

He said what the company had not done was to introduce hydrocarbons into it.

“We are fully done, fully installed. However, the way it works is: you must get the regulator who will come to do the final work before we start full commercial production.

“We expect that to be completed by July 28, and then full commercial production will start.

“It is now no longer in progress or under construction, it is done. Regulatory agencies must give the right to start commercial operations.”

Our $3.1bn investment in Adani Group is ‘healthy’ — TotalEnergies