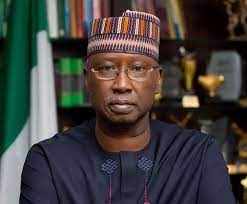 Mr Boss Mustapha, the Secretary to the Government of the Federation (SGF), on Thursday, reiterated Federal Government’s commitment to improving the health of Nigerians.

He made the government’s position known at the 6th National Council on AIDS with the theme “Innovative Approaches Towards HIV Epidemic Control and Programme Sustainability at State Level” in Abuja.

He said “the Federal Government is committed to improving the health of Nigerians and will continue to confront and address challenges affecting HIV services that constitute a key barrier to accessing HIV treatment.”

He added that government would continue to finance the treatment of the additional 50,000 persons, noting that governments at sub-national levels were variously evolving innovative approaches to sustainable health financing, including health insurance.

He explained that government would continue to encourage HIV/AIDS services to demonstrate ownership and assurance to sustainable HIV response.

He recalled that the Federal Government, through the National Agency for the Control of AIDS (NACA) in collaboration with the organised private sector recently launched a N62-billion private sector-driven HIV/AIDS Trust Fund.

The Minister of Health, Dr Osagie Ehanire, said that the world had recorded great improvements in HIV prevention, treatment and care over the last two decades due to strengthened global and regional response to the scourge.

Ehanire, who was represented by Dr Alex Okoh, said such development led to reduction in the number of new infections across the world.

He, however, expressed concern over the rate of new infections among young people and babies born to HIV positive women, especially in Nigeria and Sub-Saharan Africa.

The minister said that the goals that no child in Nigeria should be born HIV positive and zero new infections informed the theme for this year’s National Council on AIDS: “Innovative Approaches toward HIV Epidemic Control and Programme Sustainability at State Level”.

He commended stakeholders and partners for their collaboration toward controlling the spread of the virus, especially the U.S.

According to him, the National AIDS Indicator and Impact Study (NAIIS) in 2018 rebased the HIV epidemic in Nigeria, resulting in HIV prevalence reduction from 3.4 per cent to 1.3 per cent.

Ehanire, who emphasised the need to close the gap in HIV treatment, said there was treatment gap of about 200,000 persons yet to know their HIV status.

He, however, assured that “it is heart-warming to know that we are closing the gap rapidly. We have doubled treatment sites from 1,091 in 2015 to 2,321 in 2021 to ensure that no one is left behind and re-established the National Treatment and Prevention of Mother-To-Child Transmission (PMTCT) programmes.

“The programmes have successfully increased treatment coverage from below 40 per cent to more than 80 per cent.”

The health minister identified the Basic Health Care Provision Fund (BHCPF) as another innovative strategy put in place by government to ensure that women and children accessed quality health services.

He added that the Fund would also ensure that women and children were protected from impoverishing health expenditures.

He said there was now greater facilitation of high population-based viral load suppression among HIV-positive persons on ART, with a decline in morbidity and mortality of persons living with the virus.