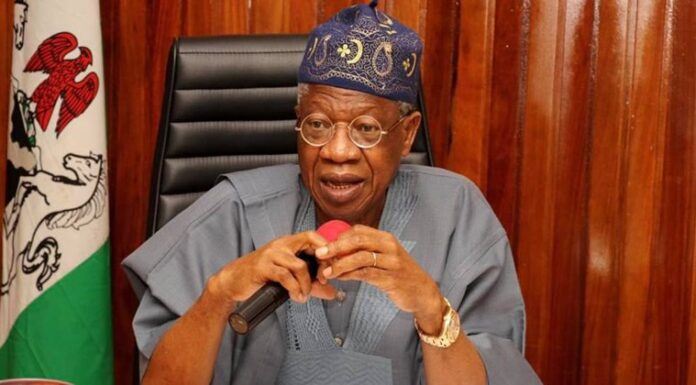 The Minister of Information and Culture, Alhaji Lai Mohammed, on Wednesday interacted with Amazon Prime Video towards building capacity of Nigerians for local content in movie production.

The Minister held a closed door meeting with a delegation from Amazon Prime Video and agencies under the Ministry of Information charged with responsibilty for regulation of content creation as well as protection and censoring of films.

Agencies in attendance were the Nigerian Film Corporation, National Broadcasting Commission, National Film and Video Censors Board, Advertising Practitioners of Nigeria (APCON), among others.

Information Minister, Alhaji Lai Mohammed, and some others at the meeting briefing journalists, the Minister said he was into talks with the company on capacity building for quality local content in the nation’s fast growing movie industry.

He said that the Federal Government was collaborating with Amazon Prime Video, a subscription based streaming company,  to empower youths through training on local content, to employment opportunities.

Mohammed said when quality content are produced and streamed, it would create wealth for upcoming artists who would be encouraged to create more films, thereby creating more jobs and revenue for government.

The Minister said that Nigeria was expected to produce 50 films weekly but emphasis would be on quality and not quantity.

“We look forward to the collaboration with Amazon, we do not want a situation whereby Amazon will just come here, take our content and go with it.

“We want Amazon to also contribute to the growth of the industry in terms of capacity building and in terms of transferring technology to our people,” he said.

The Minister said that Amazon would be launching its services in August.

Lonian said this would be done alongside supporting development of capacity of the local film producers and upcoming artists.

She said that streaming services were relatively new in Nigeria, so the firm was entering long term financing models for overall benefit of the nation’s movie industry.