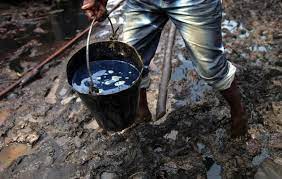 The Federal Government has attributed the menace of crude oil theft to the worsening unemployment situation in the country.

Dr. Chris Ngige, the Minister of Labour and Employment, said this while declaring open the 8th Meeting of the National Employment Council on Friday in Abuja.

Mr. Olajide Oshundun, the Head, Press and Public Relations, quoted the minister as saying this.

Ngige, who is the chairman of the council, said that oil theft has made Nigeria to become a mendicant nation, resorting to begging for survival.

According to him, this menace has hampered the efforts of the federal government towards creating jobs for the country’s teeming youthful population.

“I am aware that you people know that we are at a very critical stage in our nation’s life. We have economic problems all over the world, but our own in Nigeria is self inflicted. Our main source of revenue is oil.

“Now, we cannot even produce the 1.8 million barrels. We are hovering around 1.1 million barrels per day, and they told us that some people are stealing our crude oil.

“This is a very serious matter because it has made us become very mendicant. We are now a mendicant nation, resorting to begging for survival,’’ he said.

He added that the nation cannot continue that way because it has hampered efforts to create jobs for our teeming youthful population.

The minister further said: “Some people were analysing the situation and said that when we started the country, the white men came here and took all the jobs.

“ We were seeing them with white shirts and ties and the jobs became known as white collar jobs. Later, our own people started going to university and after graduation, joined in the ‘white collar jobs’.

`Those who took over from the colonial masters did not plan for tomorrow. Number one is that our population is growing uncontrollably.

“Our population astronomically outpaces our Gross Domestic Product (GDP). We are neither finding our youthful population white collar jobs, nor making arrangement for them to do the blue collar jobs.

“Blue collar jobs are the ones you do with your hands, applying skills,’’ he said.

Ngige also noted that the only few blue collar jobs were created in the transport sector, especially in rail and maritime, without producing indirect jobs to complement them, while the situation was made worse by foreigners.

He added that this was especially Chinese and other West African people who have taken over most of the blue collar jobs.

He also blamed the overflowing joblessness for the youth restiveness all over the country.

“Unemployment is not confined to Nigeria, but our own is worse because in other climes, people are earning money from blue collar jobs. Here, we have no blue collar jobs for our workforce.

“We have polytechnics but they are competing with universities for degrees. We see a polytechnic say it is awarding degree. We have technical colleges that want to equate their certificate with a degree.

“Nobody is interested in having technical skills. Everybody wants to be drawing and designing in air-conditioned offices, which is what the degree man does. The degree men are not supposed to be the implementers.

“ The field implementers are the technologists and technicians and in proper climes, they are very well paid and live decent lives,’’ he said.

According to him, to reverse this ugly trend, there is need for a handshake between the National Employment Council and the National Skills Council, which is domiciled in both the Federal Ministry of Labour and Ministry Education.

He said this also comprised the ministries of Industries and Trade, Works, Power, Science and Technology, and all other government creations, with a sense of urgency.

Ngige therefore recommended the incorporation of the Federal Ministry of Communication and Digital Economy into the National Employment Council, being that we are in a digital age which made for the creation of digital jobs.

He described digital jobs as the best way to absolve the bulging mass of youths that are now unemployed.

“We need to also look at NNPC and gas pipeline projects. Nigeria is doing two projects now, the Abuja-Kaduna-Kano (AKK) and the one that transverses the West African Line into Morocco and extending to Europe.

“So, these are all ongoing critical infrastructure projects with large quantum of jobs to be created from them,’’ he said.

He welcomed the proposal for the creation of labour desks in form of job synergy points in the ministries, departments and agencies where needed in order to facilitate job monitoring and creation.

“We conceived concept of labour desks for trade disputes and that was why we started in the ministries and agencies that have propensity for a lot of trade disputes.

“Now, that this Employment Council is thinking ahead, you should also bring a proposal so that we can do reforms through the Ministry of Labour.

`This will ensure to have job creation contents in conjunction with the trade dispute aspect, in addition to managing strike actions,’’ he said.