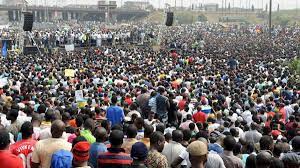 While Nigeria’s population continues to rise with the manifestations of all possible attendant phenomena of change, it is apparent that efforts directed towards parameters of developmental architecture  navigated proactively and consciously to appreciably make situations fall in place towards embracing new realities with sensibilities, are evidently missing. It is therefore, indisputable that the preponderance of the reactive culture in the Nigerian society has brought it to a position where it is glaringly grappling with unpleasant considerations, which of course, are by and large the reflection of inactivity towards making provisions for the future. The collision of several defective offshoots colliding to produce turbulence in recent time, are largely traceable to years of insensitivity towards establishing structures to respond to changes which in its non-constant nature, would naturally bring new patterns and realities into play. The inability to respond appropriately to these realities as they surface, remains a ground for resistance with shortcomings propelling deficiencies — whether on individual, community, societal or on larger scale,  national level.

Since at the national scale of thought the Government is believed, with the mandate bestowed on it, to be a pacesetter for the society (and when narrowed down, the communities and its citizens where applicable), the Government has always been held responsible for the standing posture of the society before changing circumstances. Hence, where the society under a Government is caught amidst crises lasting beyond tolerable limit in the presence of changing circumstances, accusing fingers naturally are pointed to the Government for such limitations. It is believed by the people that the mandate given to Government as an institution is to hold in trust the decision making organ of the society within its faculty, with the expectation to effectively and efficiently blend commonwealth apparatuses together to ensure the society at all times move in the highest achievable pace sitting on the grounds of peaceful coexistence in health, safety and appreciable living conditions. Where there is a lasting shortcoming from such expectations, the people turn back to their Government to question the credibility of the latter’s existence. Such disposition which in defining categorisation have been described as call for accountability, has led to the sacking of several government across nation of the world over ages.

In modern time, the sacking of Governments falling short of such expectations have been institutionalised more civilly through elections where a Government believed to be performing below expectation is unseated for another which the people believe will do better. At critical points, beyond the institutionalising of these patterns as practiced under democracy, the use of force, such as military coup and violent protests or civil unrest has been a norm across some African Countries as one of the strategies to unseat a government believed to have fallen short of all expectations. In other part of the world, the use of protests have been institutionalised as one means through which public officers believed to be performing below expectations are being pressed to step down.

Hence, for any Government to satisfy the demands of the expectations of the populace, according to the trust placed on it by the people, sensitivity to pointers of dynamics towards situation of change is imperative. Any Government insensitive to such signals lies in the danger of being cut unawares by the claws of change, which may pose new challenges it is unprepared to handle. The failure to address such situations timely and  appreciably, holds the danger to render the Government becoming unpopular amongst the populace, and thus may cost it a seizure of its mandate from the people who may decidedly withdraw their trust where possible.

Recently, the collision of myriads of turbulence which are reflective manifestations of deficiencies giving expression to the non-proactive and insensitive posture of governance system in Nigeria over time, has been compounding to render the Country in shambles. Some of these offshooting strings have their roots deep seated within the structures of the prevailing system of governance, and as such a product of weak and archaic systemic patterns which are inconsistent to rising, pressing and changing demands. The inability of the structures to attend to the changing demands have to that extend, set-in the background of resistance which are hostile to new realities — thus the collision of several deficiencies muddling up to set the entire society in disarray and confusion.

Hence, the call for the overhauling of structural patterns within the system of governance of the Federation apparently remains a cogent argument which establishes sense of reason. However, the apparent will displayed by the present Government to effecting modifications towards metamophosing these perceived antiquated structures is not convincing enough to get the required result towards addressing the prevailing storms ravaging the Country.

From social, health, economic, political to cultural formations among other facets of life in the Country, the structures within the existing institutions appear largely to be suffering from the defects of institutionalised decay which have long outlived their relevance. Hence, such subjects as the need for restructuring, state policing, fiscal federalism and cost of governance, among others, have continued to attract topical dimension of discourse as necessary structural metamorphic parameters needed to be adopted to reposition the socio-economic and political formations of the Country. The arguments have been established that only with such metamorphosis that the Country can experience a redemptive turn from the prevailing clusters of circumstances she is wobbling before.

The years of insensitive posture to the dynamics of change which over time have always caught the Country in the claws of unpreparedness, have cost  her huge losses. The manifestations of the collision from the lack of foresight to project imminent circumstances of change and work out patterns to proactively respond to them when they surface, is bringing the Country to her kneels before the realities of the collision of several of these circumstances. The fact remains that larger part of challenges which have graduated to deep rooted problems now sitting on faulty grounds, are preventable challenges which could have been forestalled with proactive culture of sensitivity to projections of future possibilities and making profound provisions towards responding to same.

Given that the Country has been caught in the web of the prevailing circumstances borne out of the perceived insensitive posture to future possibilities, reason only demands that the Country cannot  keep on roving within the prevailing entanglements till an irredeemable explosion sets in. It is, therefore, sacrosanct for the present Government to look intensively into the realistic metamorphosis pragmatically needed to be effected within the structural character of the governing system of the Federation and effect same timely and appropriately.

Since, some of these reconfiguration demands broad engagement to establish, it is paramount for the custodians of the political seat of power in the Federation to lead the course as a mission with convincing political will to drive the channel of all the needed train of activities with coordination of resources and participation towards the goal. While the National Assembly has recently convened a forum of a two-day National Public Hearing on proposals to alter the provisions of the Constitution of the Federal Republic of Nigeria, 1999, it is more pressing that such efforts must be overarching with concerted support from all angles, beginning from the Presidency to other stakeholders within the structures of other navigating arms of government formation across the Federation. The heightening of insecurity, economic hardship, social ills, crimes, and socio-political crises among other troubles, are compounding at a level too elaborate to conceive. Hands must not be placed on the chins before pragmatic efforts are mobilised to sincerely prevent the Federation from irredeemable collapse.