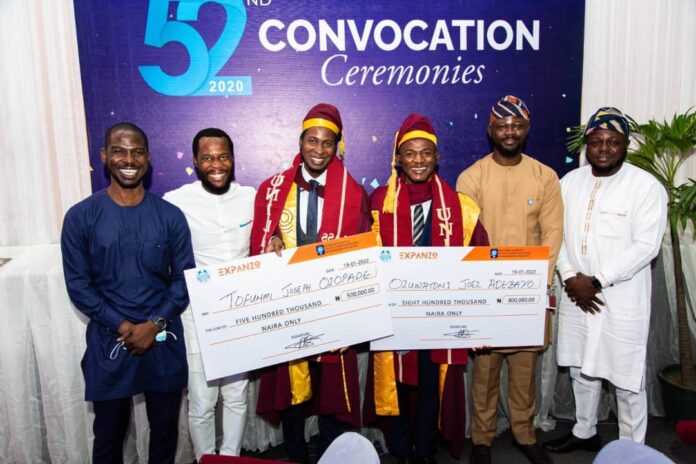 A technology consulting firm in Lagos State, Expanzo announced its partnership with the University of Lagos (UNILAG) to re-shape the future of Engineering in Nigeria by awarding a N5million tech development grant to students.

The partnership seeks to support the best and most viable final year project from the Faculty of Engineering in the University of Lagos annually.

It was learnt that the move is an attempt to build a more productive workforce and support new innovations from young minds in Nigeria.

On the 16th of January, the inaugural selection took place at the Entrepreneurship and Skill Development Center (ESDC) in the University.

The panel received twenty-one entries and shortlisted five winners of the N5million.

Expanzo, a special purpose vehicle set up specifically for developing youth talent is led by Ayodeji Macaulay, a tech CEO with vast experience in Telecommunications, HealthCare, and Gaming Industries.

Macaulay sits on the board of over five companies and has contributed to growth and expansion across these industries.

Macaulay, who expressed his appreciation to UNILAG, said, “For a long time I had been involved in different groups and different forums on how to develop Nigeria, how to manufacture in Nigeria and so many other concerns to move Nigeria forward.”

He mentioned that creativity starts from schools, adding that “the future of Nigeria is in the youth, they have so much potential and all we have to do is believe in them and support them.”

He further added that the idea behind Expanzo is to partner with the University to enable, mentor, and finance the ideas that would take Nigeria to the next level.

Macaulay concluded by saying, “I hope to continue this project every year, with it getting bigger and bigger and also hope the ideas chosen would be able to change the entire country.”

In his remarks, Vice-Chancellor of the institution, Professor Oluwatoyin Ogundipe started off his speech by saying, “I am excited because I can see there is a future for this country despite all odds.

He appreciated everyone present and concluded by saying he hopes this initiative would be in continuity.

Also speaking, Director of the Entrepreneurship and Skills Development Centre, UNILAG, who also doubles as the moderator, Professor Adebisi, appreciated Expanzo Initiatives for the opportunity created for the students.

The professor said, “We need people who believe in Nigeria, people who would never forget where they are coming from, people who come to give back to society.”

He further mentioned that it was a very proud moment for him as history is being made in the University of Lagos.

Meanwhile, Adesanwo Adewale of the department of Chemical and Petroleum Engineering emerged as the winner, receiving a grant of N2million naira.

Richard Chukkas Ardor of the department of Electrical/Electronics Engineering was the first runner-up amd was awarded the sum of N1.2million.