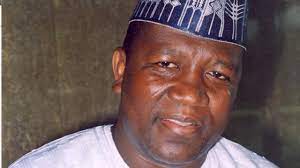 Former Governor of Zamfara, Alhaji Abdulaziz Yari, has promised to finance the education of the children of the late Alhaji Bello Dankande-Gamji, an All Progressives Congress (APC) in the state.

Reports said that Dankande-Gamji died in the early hours of Tuesday, in Gusau, at 56 after a brief illness.

He left behind four wives, 20 children and six grand-children.

”I was deeply saddened over the news of the passing away of my immediate Lieutenant and close associate.

“He served in different capacities during my tenure as Governor of Zamfara. I would like to, on behalf of my humble self and the entire members of the APC, convey our deepest sympathy and condolences to the family, friends, people of Bakura and the entire state over the passing away of this courageous, loyal and patriotic citizen.”

Yari has constituted a five-member committee under the Chairmanship of Muhammad Rini, Alhaji Sani Kauran-Malan, Alhaji Rabiu Ilili-Bakura, Alhaji Abdullahi ‘Yarkufoji and Alhaji Umar  Jarma to ascertain the expenditure of the education for his children.

He prayed Allah to give the deceased Aljanaat Firdaus​.