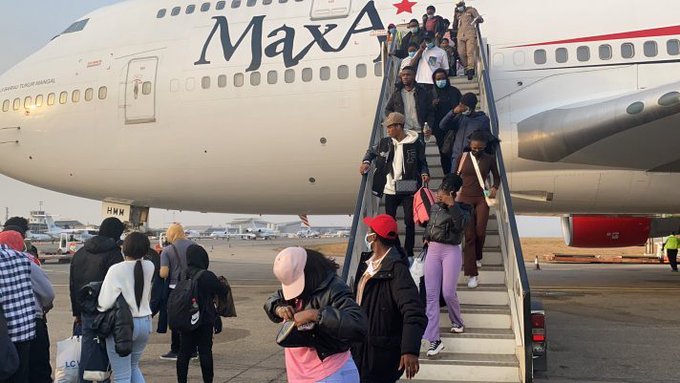 The News Agency of Nigeria (NAN) reports that two aircrafts provided by the Federal Government of Nigeria were assigned to repatriate Nigerians living in the Ukraine who were caught in the middle of the Russian attacks on multiple fronts.

The first aircraft which was Max Air flight 747, came with 450 Nigerians from Ukraine through Romania.

Then , Air Peace brought 183 Nigerians from Warsaw in Poland, including adults and kids and the third was also an Air Peace flight. All flights landed at the Nnamdi Azikwe International Airport on Friday.

This was due to many Nigerians fleeing to neighbouring countries, following Russia’s attacks on Ukraine on multiple fronts that began on Feb. 24.

NAN also reports that on Feb. 28, the Federal Government said its diplomatic mission had received a total of 256 citizens from Ukraine at Bucharest, Hungary, Poland and Romania since Feb. 27, following the invasion of Ukraine by Russia on Feb. 24, many residents, including Nigerians had been forced to flee to neighbouring countries.

However, the number of people on the third batch has not been communicated yet.