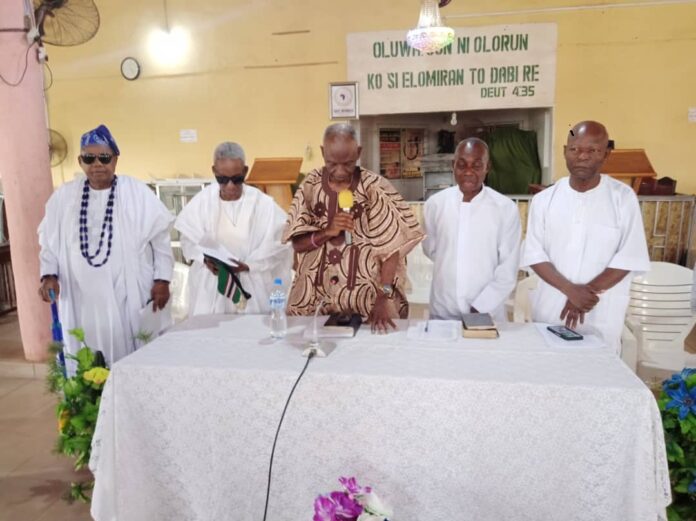 The Ethiopian Church of Christ celebrated its 103 years of existence in the propagation of Christianity in Nigeria.

The Spiritual Head of the Church, Snr. Pastor Babatunde A. Ojubanire (JP), at a press conference organised by the church to commemorate the 103 centenary of the church held in Ile-Ife, its headquarters on Saturday.

He said, the Church has been in existence for over a century, noting that the Church has contributed immensely to political, economic and social well-being of Nigeria as first indigenous church in Africa.

In an address read by the Head of the Church, Pastor Ojubanire said, “tThe founder, Adeniran received revelations through visions and dreams in  which he was commissioned to prepare Africans for the task they needed to face.

“This task affects the political and spiritual lives of the people in which he predicted that Nigeria would soon gain her independence from the British Government.”

“This would be pursued through Nigeria own efforts by renouncing and liberating themselves from foreign dominations of worship that had been attached to western social and spiritual life. The vision and mission of the founder was Africa/Nigeria independence at sight, evangelize the world, serve God according to the teachings of Jesus Christ as contained in the Holy Bible.”

He said, the religion-cultural evolution, according to the founder, would allow Africans to establish an African-oriented Christian Church that would use the people’s language and culture as a medium to gain a meaningful relationship with the God and to appeal to African emotionalism as opposed to the already existing western-oriented christianity.

Ojubanire stressed further that the church was officially opened by Oba Ademiluyi in 1928 in Ile-Ife where the movement was accepted and gained considerable ground in which Adeniran’s message on cultural evolution coincided with the cultural situation in the city hence, Ile Ife became National Headquarters of the church.

“The adoption of the name ‘Ethiopia,’ showed the revolutionary motives onto which certain biblical assertions were forced. Ethiopia was one of the earliest places where Christian civilization developed as far back as in the fourth century.”

He noted that the Church  accepts the Holy Bible as the standard scripture of her faith and the practice of Baptism and the Eucharist but with some modifications.

“The Church uses prayer (Iwure) in place of Adura and supports the use of both water and western medicines for healing.”

Ojubanire opined that the Church has been able to incorporate African thought processes into biblical messages and faith, saying that is why it refused to bow to the secessionist agitation forces to terminate its existence as a Christian movement, is a clear evidence of the founder’s vision and commitment.

The Spiritual Head of the church averred that the Church is best known as indigenous Church in Yorubaland that is able to demonstrate the dynamic effect of the indigenous language as a vehicle that conveys a truly indigenous African Christianity.

“It is one of the earliest successful movements that pioneered the cause of African Christianity through the recognition and use of African linguistic genres in their liturgical practices and made Christianity relevant to African.”

Asked about morals leaving of Churches in Nigeria, Oba Depo Towobola, Lerinyo of Aluti-Erin, said, “And if you come from a Muslim home it will reflect in your character, if you come from a Christian home it will surely reflect in your character. Character only has left the Church and it has affected the country, the Churches are not going in the right direction so the nation is not going in the right direction.”

Speaking on the position of the Church on Muslim/Muslim ticket of the All Progressives Congress presidential candidate, Barrister Gbanga Awosode, the legal Adviser of the Church, said, “We are under Christian Association of Nigeria (CAN) and Organisation of African Instituted Churches (OAIC).

“We will listen to their directives on who to vote for. If the organisations give directives, we will pass it to members. There is political and spiritual freedom for the people to decide what they are going to do,” he posited.

Awosode said, “The practice of the Church is different from other Churches in which founder combined political with spiritual freedom. Other Churches like Catholics, Celestial Church of Christ sprang up to conduct their services in Yoruba language as a result of the founder’s vision of indigenous language.”

Similarly, Pastor Kolade Badewo and Joseph Ogungbade noted that the vision of the founder is gradually being fulfilled.

“We conduct our services in Yoruba language to fulfill indigenous ideas as envisioned by the founder, Rev. Adeniran. We imbibed African decent dressing culture with distinct worship. The services of some Churches reflected the language of the people.”

Also, Pastor Olusegun Adeyeni (JP), said, “The Church’s impact on education is noteworthy. The ‘Ijo Adulawo’ was not the first Church to establish schools rather one of the first churches after the missionaries. It has contributed immensely to the private and public education sector in Nigeria. Its schools spread across the country which have produced many professionals to the development of the country.

“The Church established Ethiopian primary and secondary schools which had produced many important personalities in the country. This is unprecedented in the history of the country.”

The Church anniversary which commenced on Thursday 29th September, 2022 with activities marking the 103 centenary of the Church with the theme “I will Heal their Land” and ended on Sunday, 2nd October, 2022.