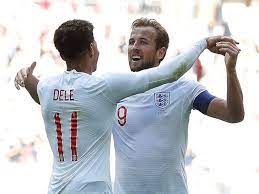 Tottenham striker, Harry Kane, has reacted to the club’s decision to sell Dele Alli to Everton.

The 25-year-old brought an end to his seven-year association with the north London club, having joined as a teenager from MK Dons for £5million in 2015.

Alli has now signed a two-and-a-half-year deal at Goodison Park to link up with new Everton boss Frank Lampard.

The deal has been structured to allow Alli to leave on a free transfer, with significant bonus payments included that could reportedly net Spurs up to £40m.

Kane and Alli struck an impressive chemistry in the early years of Mauricio Pochettino’s reign, with the pair netting 57 goals between them in the 2016/2017 campaign in all competitions.

“We’ve had some great memories together over the past 7 years.

“Thank you for everything you have given me and the club! See you soon.”