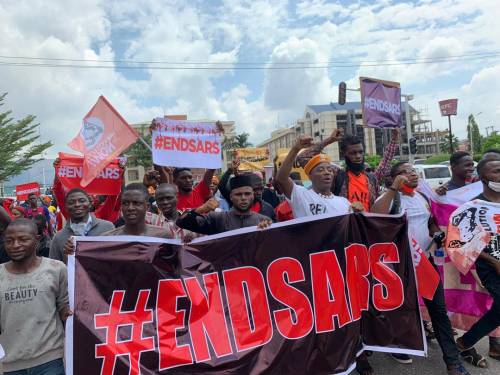 The Lagos State EndSARS Panel has released its report and the details contradict the position of the Minister of Information and Culture, Lai Mohammed, the military, and the police who had earlier denied shooting and killing of protesters at the Lekki Tollgate.

Contrary to the denial by Mohammed, the military, and the police, the panel described the incident at the Lekki Tollgate as “a massacre.”

The panel was set up to look into complaints of citizens on human rights abuses by the police and the Nigerian Army following the incident at the Lekki Tollgate on October 20, 2020.

Some protesters were killed after live bullets were shot at them by soldiers drafted to the Tollgate to quell youths protesting against police brutality.

The report by the panel already released had indicted the police and soldiers of the Nigerian Army of having killed and maimed harmless youths protesting against police brutality.

Recall that the incident was faulted by the nation’s Information Minister, Lai Mohammed who claimed that some proponents of the protest used the alleged massacre to paint the President Muhammadu Buhari-led government in bad light before the international community.

Mohammed, in a series of press conferences, denied that nobody was killed when soldiers invaded the protest scene.

During the marking of the one-year anniversary of the protest, the Minister had described the EndSARS massacre at Lekki tollgate as false.

Reacting to an independent investigation by the CNN which revealed that soldiers massacred protesters at the Lekki tollgate in Lagos State, Mohammed said report was ‘fake news’.

The minister had tagged the widespread reports as: “Phantom Massacre at Lekki tollgate” which should be discarded.

Despite Mohammed’s stance, the panel’s report churned out proofs that there was indeed a massacre at the Lekki tollgate.

Reacting to the report, a Lagos-based lawyer and human rights advocate, Barrister Samuel Okoli, called on the Federal Government to suspend Lai Mohammed over his stance on the Lekki massacre.

Okoli said suspending Mohammed would show that the government is willing to make amends.

Speaking with Newsmen, the human rights advocate said the Federal Government should ensure public trial of all soldiers and police officers involved in the Lekki massacre.

According to Okoli: “From the begining, everybody knew there was a massacre in Lekki but Lai Mohammed is good at twisting facts. If this government is serious, the first thing it will do is to suspend Lai Mohammed because it’s now obvious that the Lekki massacre was real; everybody saw it, DJ Switch posted it, there were live testimonies.

“There were investigative journalists who carried out independent investigations. Freedom for Investigative Journalism had reported that about 20 persons died from the massacre.

“But, Lai Mohammed seeing all those things, still went ahead to defend the government. I think if the government is serious; it should suspend him to show that they are contrite and want to apologize for what happened.

“The Federal Government should apologize and also carry out an open trial of all military and police officers that we’re involved in that massacre, all of them should be tried openly.”

Also commenting on the report, an official of the Benue State Government who preferred not to be mentioned told Newsmen that the panel report has “exposed some evils” in the President Muhammadu Buhari’s Government.

According to him, other facts regarding killings across the country may soon emerge, charging Nigerians to watch out.

“The report actually made my day yesterday. Of course, what do you expect from a government that does not have the interest of the people at heart? Nemesis is beginning to catch up with some people in this country. I’m glad that the report exposed the evil going on in the government.

“When it goes wrong on their side, the presidency will suddenly become quiet like a dead and dumb person, it is a shame. When Governor Samuel Ortom was saying that there is a hidden agenda on the general insecurity, Nigerians did not understand. More facts will still emerge. Just watch out”, he added.

Similarly, an Abuja-based human right lawyer, Maduabuchi Idam, has urged the Buhari-led government to apologize to Nigerians over the incident at Lekki Tollgate.

Idam said the report has exposed the government of the day of sending its machineries to kill defenceless Nigerians.

He told Newsmen: “I must quickly commend My Lord, Honourable Justice Doris Okwuobi-led panel of inquiry, for the well considered and well delivered report on the Lekki Tollgate Massacre which took place on the night of the 20th of October, to the wee hours of the morning of 21st of October 2020.

“Without much ado, The report has not just vindicated those who participated in that protest, but it has clearly indicted the Government of the day by confirming the fact that the machineries of the state were ruthlessly deployed against innocent, defenceless and unarmed Nigerian citizens who only came out with Nigerian flags to register their displeasure against police brutality, by way of peaceful protest which is a constitutional right guaranteed in Section 40 of the Constitution of the Federal Republic of Nigeria 1999.

“Before going further, I quickly demand that the President of the Federal Republic of Nigeria should on behalf of the Nigerian Army, the Nigerian Police and the Minister of information, forthwith personally tender an unreserved apology to the people of Nigeria, for the unwarranted, unprovoked, avoidable and needless killings of defenceless, armless and peaceful protesters on that day.

“As I await President Muhammadu Buhari’s apology, i expect that the government of Lagos State should immediately implement the recommendations made by the panel as contained in the report with a view to adequately compensate the families of victims of that unwarranted and unprovoked massacre.

“Nigeria is a democratic state and not a banana republic, therefore, each and every citizen must lend his or her voice to constantly reject and condemn executive high-handedness and primitive use of force against free citizens as it has become the hallmark of this administration.