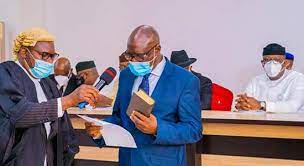 Ekiti State House of Assembly on Tuesday in Ado-Ekiti screened and confirmed Justice Oyewole Adeyeye as the substantive Chief Judge of the state.

His confirmation followed the adoption of the report of the House Committee on Judiciary and Legal Matters, submitted by its Chairman, Tajudeen Akingbolu, (APC Ekiti West Constituency) during plenary led by the Speaker, Mr Funminiyi Afuye.

Akingbolu, while reading the report of his committee said the committee found the new chief judge “worthy and fit” for the job, calling on members to expeditiously confirm him.

Also the speaker read another letter from the governor on the Revised Appropriation Bill, 2021.

Justice Oyewole Adeyeye, while addressing the house promised to ensure that justice administration would be given its necessary attention.

Also,  the house during Tuesday’s plenary summon the state Commissioner for Works, Mr Sola Adebayo, on the ways out of the deplorable state of the roads across Ekiti.

Earlier, the Deputy Speaker, Alh.Hakeem Jamiu, called the attention of the house to the deplorable state of the roads as a result of the influx of heavy duty trucks into the state.

Commenting, the speaker suggested that Ekiti roads should be tolled in order to raise revenue for their rehabilitation.

The lamakers also unanimously passed a bill to ensure food security through active participation of political and career office holders in agriculture,2021.

This followed the submission of the report of the House Committee on Agriculture and Rural Development by its Chairman, Mr Martins Ojo, (APC, Ijero Constituency).

Among bills which passed through the first readings were: “A Bill for a Law to Provide for the of the Registration and Regulation of the Activities of Motor Vehicle and Motor Vehicle Spare Parts Dealers within the State and other matters connected therewith,2021 and Ekiti Regulation Approval Bill, 2021.”

Another one is ”A Bill to Establish the Ekiti Infrastructure Maintenance and Regulatory Agency to Control and Regulate the Erection and Installation of Masts and Towers,2021 and Prohibition of Open Defecation in Ekiti Bill,2021.”