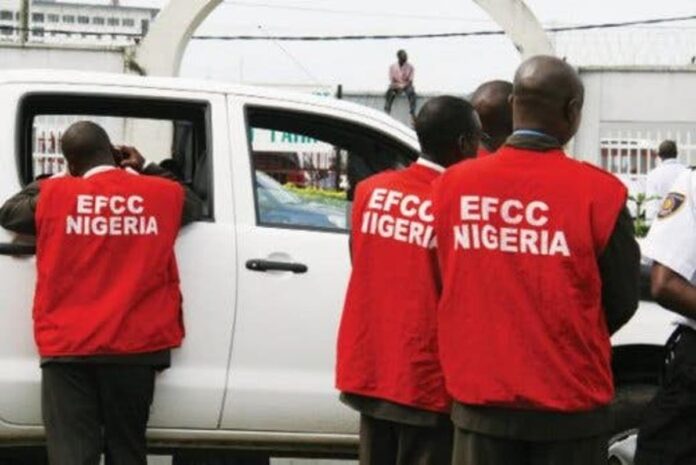 The Benin Zonal Command of the Economic and Financial Crimes Commission, on Wednesday October 13, 2021 arraigned the trio of Jessica Roselyn Edoleyi, Charles Endurance and Ayase Destiny before Justice S. M.Shuaibu of the Federal High Court sitting in Benin City, Edo State for offences bordering on obtaining by false pretense, intent to defraud and impersonation.

Edoleyi was arraigned on a six count charge for allegedly obtaining the sum of Two Million, Five Hundred and Fifty Thousand (N2,550,000) from one Airiohuodion Efosa on  the pretext of securing a Canadian Visa for him. Charles Endurance  and Ayase Destiny are alleged to have impersonated the identities of Roland Scout,  Sina Joorachi, George Lawrence in their attempt to defraud unsuspecting foreign nationals.

One of the charge against Edoleyi reads: “That you Jessica Roselyn Edoleyi on or about the 7th day of January,  2019 at Benin, Edo State within the jurisdiction of the Federal High Court with intent to defraud did obtain from Airiohuodion Efosa the sum of N900,000 which was deposited into your Zenith account No. 2082592684 through the account of one Amedu Michael Ejeh with account number 017668953 domiciled in Guaranty Trust Bank Plc under the false pretense that the said sum was part of the money meant for getting a Canadian Visa for him, a representation which you knew to be false and thereby committed an offence contrary to section 1(1)(a) of the Advance Fee Fraud and Other Fraud Related Offences Act, 2006 and punishable under same section.”

The charge against Ayase Destiny reads: “That you Ayase Destiny sometime in 2020 at Benin City, Edo State within the jurisdiction of the Honourable Court did fraudulently impersonate the identity of Sinn Joorachi, an American medical doctor by sending his picture to unsuspecting ladies abroad through the internet to obtain money from them and you thereby committed an offence contrary to section 22 (2)(b)(ii) of the Cybercrime (prohibition, prevention etc) Act 2015  and punishable under section 22(2)(b)(in) of the same Act.”

Endurance is alleged to have fraudulently impersonated one Roland Scout, an American with intent to obtain money and thereby committed an offence contrary to Section 22(2) (b)(ii) of the Cybercrime ( Prohibition Prevention, Etc) Act 2015 and punishable under same Act.

In view of their plea,  the prosecution  counsel ,  K.U. Udus and K.Y. Bello prayed the court for a trial date and an order to remand the defendants  at the Correctional Centre pending trial.

Justice Shuaibu adjourned the matter till October 18, 2021 for hearing of the bail application and ordered that the defendants be remanded at the Nigerian Correctional Facility.