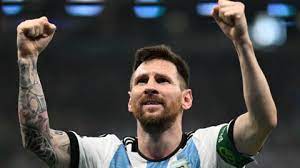 Messi said Maradona would be very happy for him after he broke the record for most World Cup appearances for Argentina.

Recall that Maradona had appeared 21 times for Argentina at the World Cup in the past.

The Paris Saint-Germain forward achieved the feat after he featured in Argentina’s final World Cup group stage 2-0 win against Poland on Wednesday.

Messi now has 22 appearances for Argentina in the World Cup so far.

Speaking after the game, Messi said at his post-match press conference: “I learned it recently, I didn’t know it. It’s a pleasure to be able to continue to achieve these kinds of records.

“I think Diego would be super happy for me, because he always showed me a lot of affection; he was always happy when things went well for me.”