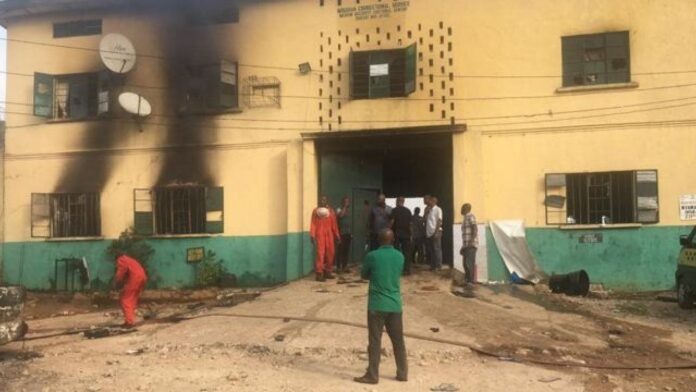 It was recalled  that the gunmen during the attack on the Centre, set free about 252 inmates.

The Deputy Comptroller General, who was at the Centre to take stock of the incident, stated that the number of the attackers outnumbered the armed guards on duty.

According to him, “When the gunmen came, they engaged our men at the main gate and opened fire on them.”

He explained that they (gunmen) killed one of the armed guards, stressing that the attackers were able to force their way into the correctional centre to set the inmates free.

The Deputy Comptroller General explained that it was not easy for the armed guards to combat the gunmen, adding that it was only when the sister security agencies came that they got reinforced.

He said that the armed guards did not just fold their arms, pointing out that it was due to their efforts that they were able to engage the attackers and some of the fleeing inmates were shot, including one of the assailants.

He assured that the Correctional Centre had launched an investigation into the incident and that he can’t talk on the insinuation of internal collaboration as investigation was ongoing.

On the deployment of technology for security, he said that there were CCTV cameras in some of the correctional centres, adding that the Centre can only provide such gadgets based on funds at their disposal.

“In any case, all the correctional centres can’t get CCTV cameras at the same time; we are providing such gadgets as soon as the funds are available,” he assured.