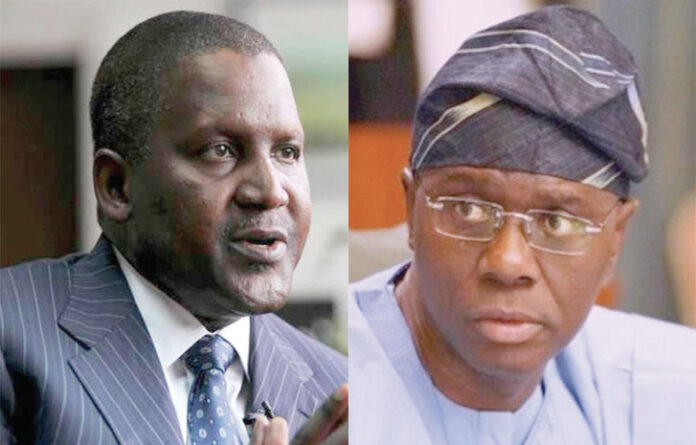 Dangote, represented by Group General Manager/Human Resources, Dangote Projects, Mr Fola Ali, said this at a luncheon organised by the Ikeja Branch of the Nigerian Society of Engineers (NSE) as part of activities to mark the 2021 engineering week.

The theme of the programme was “Integrated Engineering Development As A Catalyst For Home Grown Industrial Revolution.”

Dangote, called for youth mentorship and power sector revolution for the nations speedy industrialisation and safety of the environment.

“We need to get ourselves empowered, we should encourage collaboration among members of our distinguished NSE branches. We have engineers who cannot stand alone, you can come together,” he said.

Edwin commended the knowledge and skills of local engineers, saying they had the capacity to uplift Nigeria.

“They are the best that I have seen,” he said.

He said Nigerian engineers were excellent but needed more exposure to be able to make greater impact.

Reports that the Ikeja NSE also presented a Preliminary Report on Lagos State Engineering Index and Infrastructure Scorecard to Sanwo-Olu.

Th Minister of Interior, Mr Rauf Aregbesola, called for collaboration to close the gap between power generation and distribution while calling for adoption of clean energy as well as energy mix.

He said energy mix would provide Nigeria with additional sources of energy for industries to thrive while the environment would benefit from the clean energy.

“We have to know that production of power is wealth generation for the country,” he said.

Represented by his Special Adviser, Mr Ilori, Aregbesola challenged engineers to do more to boost the capacity of young engineers through mentorship.

Fadeyibi, represented by his General Manager, Mr Adeyinka Adewumi, enumerated efforts to meet the power the needs of customers.

He said the policies of EKEDC on metering and billing were aimed at boosting consumer satisfaction.

The Chairman, Ikeja Branch, NSE, Mr Olutosin Ogunmola, while making his opening speech, said power was important to industrialisation, “Any nation without industrial production is not going anywhere.”